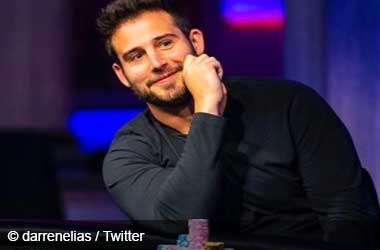 It was a nightmare – this is how American poker pro Darren Elias described an incident last week when a robber forcibly entered his New Jersey home.

He and his wife were not around at the time. The couple’s toddler was left under the care of a 19-year-old babysitter and were subject to a traumatic experience.

Elias is a four-time World Poker Tour (WPT) champion and currently holds the record for most WPT titles. He has recently returned from his third-place victory at the L.A. Poker Classic Main Event held in Las Vegas, where he walked away with $473,280.

The robber, who was later identified as 24-year-old Shannon Soroka from North Philadelphia, allegedly held the babysitter at gunpoint, and locked her in a bathroom while he went looking for cash and other valuables. The babysitter managed to escape from a window, got into a neighbours house, and immediately contacted 911. The robber fled the scene by car. The toddler and the sitter were safe and unharmed. After receiving a tip, the authorities arrested Soroka who is also a poker player.

Speaking to reporters, Elias said this was not the first time that his house had been targeted in recent weeks. The poker pro, whose career live tournament earnings exceed $7.1 million said since Soroka was also a poker player, it was highly likely that he was targeted as Soroka would have known about his recent tournament winnings.

Appreciate all the support and everyone who has reached out during this nightmare. No worse feeling than having your family in danger.

Soroka is a part-time poker player who since the start of 2017, has earned $19,719 in tournament cashes. He is currently being detained at Burlington County Jail facing multiple charges, which include armed robbery, aggravated assault, unlawful possession of a weapon, criminal mischief, and making terroristic threats.

Poker players are always on the radar of robbers and criminals. In 1998, poker pro Doyle Brunson was attacked in front of his wife in their own home. The Poker Hall of Famer has faced numerous robbery attempts over the years.

Hoyt Corkins’ home in Las Vegas was also intruded by a group of thieves who took a number of prized possessions, including two cars, a motorcycle, as well as his two World Series of Poker bracelets.

In 2012, Jonathan Duhamel landed in hospital after being attacked in his home. It turned out that an ex-girlfriend was the one who orchestrated the attack on the 2010 WSOP Main Event champion. Later that year, Theo Jorgenson’s home was also robbed. The Danish poker pro, who holds 1 WSOP bracelet and 1 WPT title, took three gunshots to the leg during the incident.

Poker players are advised to always be cautious and take extra measures to protect their homes.