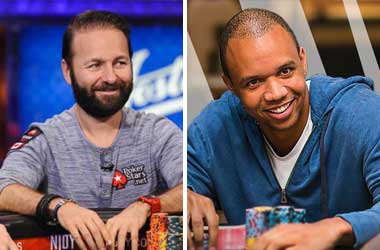 Phil Ivey is the best poker player of all time according to Daniel Negreanu. This is what Negreanu said in a recent interview with NBC Sports Chicago.

The six-time World Series of Poker (WSOP) bracelet winner said no other poker player in the world plays different variants and formats as great as Ivey.

Sure there are many pros who excel and are better than Ivey in certain areas of discipline, such as No-Limit Hold’em, but when we talk about having the most diverse skills, Ivey tops the list. Negreanu thinks Ivey is the “GOAT of poker“, and no one goes above him up to this day. The Canadian poker pro was promoting the streaming service PokerGO when NBC Sports Chicago caught up with him.

When asked why he believes Ivey is the best in the world, Negreanu said that for him, poker greatness is measured by how well-rounded you are as a player and whether you can compete in different games at the highest level. This means, your skill shouldn’t be limited to just one specialization, though working hard on mastering a certain variant has become the norm nowadays.

Throughout his career, Ivey has played different poker games like Omaha, Stud, Short Deck, Triple Draw and many others, and he almost always crushes the competition. Unlike the traditional NLH format, many new variants have limited information available, and players need to figure out for themselves how to excel in those games. Winning in these formats requires constant practice and exposure, and Ivey is a testament to that.

Ivey is one of the most accomplished player in the world, with multiple world titles to his name, including 10 WSOP bracelets and a World Poker Title victory. He has won a total of 56 WSOP cashes and appeared at 19 final tables so far, though he has not been as active in the live tournament felts due to the long-standing legal saga he’s facing, arising from the infamous edge sorting scandal which significantly impacted his career.

Ivey’s performance at the cash game tables is also unparalleled, with speculations he had earned over $100 million playing those games. Ivey has long been considered the best all-around player in the world, and Negreanu, one of poker’s most successful players himself believes that remains the case till now. Many would agree with Negreanu. Even after two decades, Ivey still has it and continues to do well at the poker tables – albeit he isn’t having as much success as he had in the past.