At the start of each year, a lot of top poker players from around the world would have over to Australia to take part in the prestigious Aussie Millions poker tournament.

Crown Melbourne has played host to the Aussie Millions for years and last hosted the tournament during Jan 2020.

The last couple of years, Crown Melbourne did not proceed with the Aussie Millions tournament and poker players thought that it was largely due to the COVID-19 pandemic and the restrictions that followed.

Things have returned to normal in Australia for quite some time now as evidenced by the 2023 Australian Open which is currently underway in Melbourne Park. Australia no longer requires international tourists to display a COVID-19 vaccination. 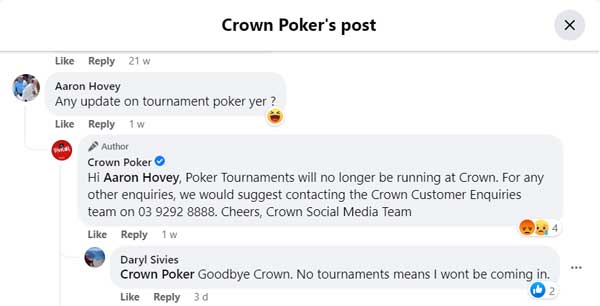 A user asked Crown Poker for any updates on the Aussie Millions and they replied stating that Crown will no longer be running any poker tourneys. They asked the user to get in touch with the customer enquiries team for further information.

The news disappointed a number of poker players in Australia and the Asia-Pacific region who took to social media to voice their disapproval. One player said that if there were no poker tourneys at Crown anymore, there was no longer a reason for him to visit their casino.

Crown Resorts has had to own up to serious compliance and regulatory breaches in the last couple of years as the operator was deemed unfit to hold gaming licenses in Melbourne, Perth and its new Sydney casino.

Crown was conditionally allowed to operate its casinos after agreeing to multiple demands imposed by gaming regulators.