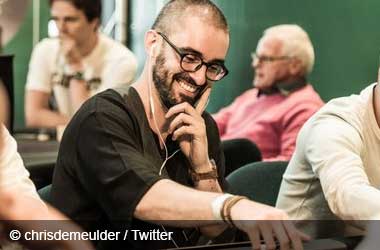 Belgian Christophe DeMeulder beat out a field of 438 competitors to claim victory at the 2018 Unibet Poker Belgian Championship’s €500 Main Event.

He walked away from Casino Blankenberge with €42,020 which helped him eclipse the $400,000 mark in tournament winnings to add to his $1.5 million in online winnings.

DeMeulder was among seven Belgian players to make the final table of 9 while the other two seats were occupied by French players.

Fabrice Halleux was the first of the final nine to be knocked out when he went for broke with pocket twos. Dominique Potenza called with a suited king-eight and spiked a king on the flop which was enough to send Halleux home with €4,070.

Werner Schoons was the next to go when he shoved with a king-jack. Unfortunately for Schoons, Samir Akhoullou called with a suited ace-queen which held up. Schoons took home €5,080. Peter Dupont fell next when he shoved his short stack with a king-queen. DeMeulder re-raised chasing the rest of the table away and won with his ace-ten. Dupont’s seventh-place finish netted him €6,350.

Tom Hermans called a three-bet raise with his ace-eight but ran into Dominique Potenza’s pocket nines which he was unable to beat. He then made his way to the cashier where he collected his €7,940 cash prize. After that, it was Jonas Van Baelen who jammed with his king-jack. DeMeulder went over the top with his ace-king forcing Akhoullou to fold. The board was no help to Van Baelen who finished in fifth place for a €10,320 payday.

Keon Lauwereys was running low and jammed his last chips with an ace-three out of the small blind and was called by Akhoullou and his pocket sixes in the big blind. The board didn’t help Lauwereys who pocketed €13,420 for finishing fourth.

It was the Potenza’s turn to go when he went all-in out of the button with a suited queen-jack. DeMeulder called with an ace-queen. They both flopped their queens but that was all as Potenza lost to DeMeulder’s kicker.

It was then down to Akhoullou and Demeulder who went on a tear to take a commanding chip lead. The last hand saw DeMeulder’s pocket sixes go up against Akhoullou’s suited eight-four. While it was looking like Akhoullou might pull it off with a straight, DeMeulder hit a boat on the river. Akhoullou took home €26,270 while Christophe DeMeulder won the trophy along with his €42,020 first-place prize.