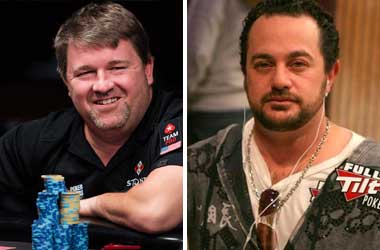 Chris Moneymaker and David Oppenheim became the latest players to be inducted into the Poker Hall of Fame.

Established in 1979, the Poker Hall of Fame honors the most influential players and important contributors to the game of poker. It was created by Benny Binion, the owner of Horseshoe Casino, and was acquired by Harrah’s Entertainment in 2004. It has been under the control of Caesars Entertainment since 2010.

Moneymaker and Oppenheim were voted to become the 57th and 58th inductees of the club by 30 living members and a 21-person media panel based on the following criteria: must have played against recognized top competition, played for high stakes, showed consistent performance gaining the respect of peers, and stood the test of time. The player must also be at least 40 years old.

Non-players are also given the opportunity to be part of the club provided they’ve made a relevant contribution to the overall growth and success of poker, with long-lasting positive results.

Moneymaker’s most important contribution to the game of poker was his 2003 WSOP Main Event victory, known as the “Moneymaker Effect“. His win is considered a game changer which sparked the so-called “poker boom“.

Moneymaker entered one of the world’s most prestigious poker events via a $40 online satellite. A largely unknown player working as an accountant from Tennessee, Moneymaker defeated Sam Farha to bring home the title and the top prize of $2.5 million.

There were some who were against Moneymaker being inducted into the Hall of Fame as he has not had any major victories in the WSOP since then. However, given the impact of his win and his contributions as a poker ambassador, he was officially welcomed this year.

Unlike the previous inductees, David Oppenheim does not have a WSOP bracelet on his resume. However, his success as a cash games specialist is worthy of praise. Oppenheim has been crushing the high stakes cash games on a consistent basis and is a regular winner in high stakes games in Bobby’s Room. His tournament results are outstanding as he has nearly $2 million in live tournament earnings under his belt.