Chip Race Poker Podcast Comes Back For Its 7th Season

Chip Race Poker Podcast Comes Back For Its 7th Season 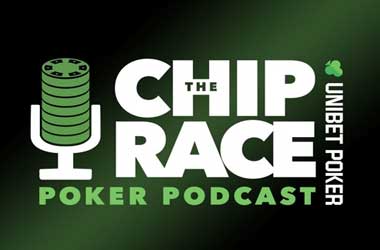 A lot of poker content goes unnoticed because of the sheer volume of blogs, vlogs, live streams, and podcasts that are out there.

One podcast that has captured a loyal audience is The Chip Race which is now entering its seventh season.

The Chip Race, which is sponsored by Unibet Poker, is hosted by Dara O’Kearney and David Lappin who are both Irish poker players.

The Chip Race has become one the most listened to poker podcasts on the planet with its main audience coming from the UK, Europe, United States, Canada, Australia and Ireland when the show began. Lappin shared more information on the current season in a recent interview.

Lappin, who is the show’s producer and co-host is obsessed with interesting stories. He said that he and O’Kearney work very well together and are usually able to get their guests to open up. Their skillfully-crafted questions have led to several well-known poker players revealing a lot about several different subjects. Lappin explained that it feels amazing to be able to elicit open and honest reactions from a guest. This is especially true with poker heavyweights.

Phil Hellmuth, Jennifer Tilly, Phil Laak, Chris Moorman and Kara Scott are just a few of the celebrated poker players that have appeared as guests on the show in previous seasons. Lappin and O’Kearney like to draw attention to the poker world’s darker crevices. Lappin said that some of the most interesting interviews occur when they have industry professionals or lesser-known players that have intriguing stories to tell.

What To Expect This Season

The Chip Race has already aired two episodes which have featured Antonio Esfandiari, Niall Farrell, Maria Konnikova and Nick Newport among others. The third installation was released on September 10th and Steven van Zadelhoff, who is the current WCOOP Main Event Champion, and Adam Sherman were featured guests. Pablo Rojas Martinez Del Marmol, who is a Spanish poker player, lawyer, and a fireman will join Ludovic Geilich on the fourth episode which will be aired on September 17th.

Lappin wouldn’t say too much more about future episodes but he did let it slip that an interview with Vicky Coren was a possibility. Those who want to learn and be entertained can tune into The Chip Race on iTunes and SoundCloud. You can check out some of the highlights on their YouTube channel.