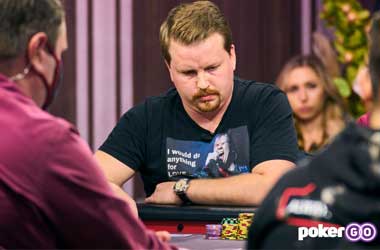 High Stakes Poker Season 9 finally began airing on PokerGO this week, and viewers were delighted to see some familiar faces from the show’s early years, which include Phil Ivey, Tom Dwan and Patrick Antonius.

In the premiere episode, a number of poker legends were joined by several newcomers, and one of them stood out for playing like a loose cannon. This was Kim Hultman, a casino and slot machine streamer.

Who is Kim Hultman?

For those who don’t know, Hultman runs the popular LetsGiveItASpin channel on YouTube and Twitch. A native of Sweden, Hultman now resides in Malta where he streams his online casino and slot games. He joined the online casino live stream scene in November 2015.

Before becoming a casino streamer, Hultman was a professional poker player. He started his poker journey at the virtual felts, playing on Everest Poker. Hultman would compete in the online poker room’s freeroll tournaments back in 2006-2007. Those freerolls awarded 5 cents and Hultman would convert that into decent winnings by taking part in bigger games.

High Stakes Poker launched in 2006 and originally aired on the Game Show Network (GSN). The show was a massive hit, becoming one of the world’s most popular poker shows of all time. Hultman has been a huge fan of High Stakes Poker ever since and it was his dream to appear on the show. Now, that dream finally turned into reality as he got the chance to compete in the show alongside the poker greats.

Sharing his experience playing against the poker legends, Hultman said he was just star-struck rubbing shoulders with the elites.

During the first episode, Hultman channeled his aggressive side and was even far more active than Ivey as the 10-time World Series of Poker (WSOP) bracelet winner folded for the most part.

The casino streamer played two memorable hands against Negreanu and Ivey and while they were not really good moves, Hultman said he’s still happy with his play.

Hultman was more motivated to do his best during the filming of the show as several followers of his YouTube channel were there to give their support.