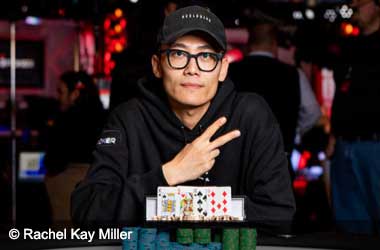 Pei “Jerry” Li emerged victorious in Event #74: $1,500 Bounty Pot-Limit Omaha at the 2022 WSOP, outlasting 1,390 entries to capture his maiden bracelet, along with the top prize worth $190,219. In addition to that, Li also took home some extra cash through the bounty element of the tournament.

The 1,390-entry field dwindled to 124 on Day 2 before the final table of nine players was set on Day 3. Several high-profile names took part, including Phil Hellmuth and Daniel Negreanu, both of whom failed to advance to Day 2. Dan Zack managed to widen his lead further in the current Player of the Year standings after cashing in the event.

The first player to leave the final table was Diogo Veiga who ran into Raul Esquivel’s aces to finish 9th for $16,339. Konstantin Angelov‘s final table journey was also cut short as he bowed out of the game in 8th place for $20,930. The Bulgarian poker pro won his first bracelet just two weeks ago in the $600 PLO Deepstack.

Next to go was Ryan Scully who ended his bid in 7th place, taking home $27,125. His great energy and fun personality at the table contributed to his good showing at the tournament. Belgium’s Eric Lescot also ran deep, finishing 6th for $35,561, so far the largest score of his career. William Gross hit the rail in 5th place for $47,153 with additional bounties, followed by Emil Tuominen who claimed the 4th spot with $63,231 in winnings.

Heads-up play was set with the exit of Raul Esquivel who walked away with $85,739 for finishing 3rd.

It was a thrilling one-on-one match between Li and King with the lead passed back and forth numerous times between them. In the end, Li finished his opponent off to claim his first bracelet. King won $117,545 for his efforts.

Li’s tournament record includes multiple cashes in mid-stakes poker tournaments in his Canadian hometown Calgary, most of which he won just this year.