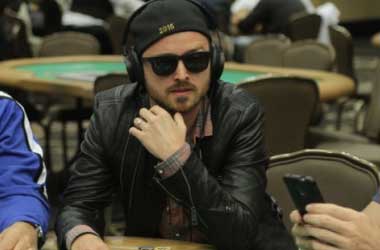 In an exciting development for Global Poker League (GPL), popular American actor Aaron Paul has joined the GPL as a participant. Maria Ho, manager of L.A. Sunset one of GPL’s 12 franchisees has named Paul as one of wildcards apart from herself.

Aaron Paul is best known for his Emmy-award winning performance as Jesse Pinkman in AMC’s iconic TV series Breaking Bad. The series entered the Guinness Book of Records for being the highest-rated show ever. Paul was outstanding in his role throughout all the seasons of Breaking Bad, winning multiple awards for his performance.

Paul has been known for his interest in poker and has played in a number of poker tournaments. He played last year in the World Series of Poker Main Event but exited early.

In a statement Paul said,

I love Poker as a game and mind sport, so I’m excited to be part of this new eSports League. Representing the L.A. Sunset together with some of the best players in the world should be a blast

Maria Ho stated that although poker as game has been in existence for years, the GPL remains focused on creating a new framework and promoting poker as a sport, especially due to the rising popularity of eSports. She called Paul the most dedicated amongst celebrity poker players and said that he was keen to learn and beat the best of poker players playing in the GPL. Ho said that he was a valuable addition to the team and hoped that he would play a pivotal role in the team’s success.

Alex Dreyfus, GPL President expressed excitement at the announcement of Paul joining the team and stated that the GPL was created to engage with poker players across the globe and the participation of Aaron Paul was a milestone towards achieving that. Dreyfus said that Paul’s joining the team was huge for the promotion of the event and wished him luck in his GPL performance.

The inaugural GPL season is scheduled to begin soon, with the second week of play commencing on April 12, 2016. The GPL has attracted much attention in the poker world thanks to its innovative take on poker. The League aims to bring in new players to poker as well as rekindle interest of people who have moved on to other games by infusing features from eSports like Magic: The Gathering and Hearthstone into it, making poker faster and
more entertaining.

Participants like Paul are therefore valuable as they are guaranteed to evoke interest and bring publicity to the tournament, increasing its chances for success.