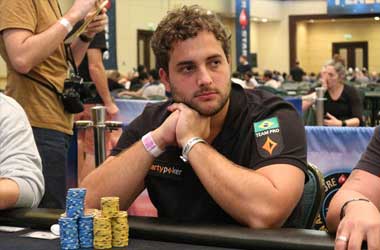 Simão topped a field of 788 entries and defeated Marius Gierse heads-up to claim $686,242 in top prize, the largest score of his career, along with his second WSOP bracelet.

The 33-year-old admitted he isn’t the best in No-Limit Hold’em and that some of his opponents were better than him in Pot-Limit Omaha which made winning the tournament more challenging for him, but Simão felt he had an edge as he plays both variants well.

Simão began the day as the chip leader, and while he had some tough spots at the final table, he was the dominant player all along, eliminating six of his eight opponents. He was supported by a boisterous rail of Brazilian supporters which included his wife.

Among the players who reached the final table was Joni Jouhkimainen who also happened to finish 5th in the same event last year. This time though, he was the first to leave the table, finishing 9th for $54,313.

João Simão widened his lead further when he eliminated Cody Rich who collected $69,727 for his 8th-place finish. Next to go was Fred Goldberg who bowed out in 7th place for $90,864.

The six remaining players became just five with the exit of Joshua McSwiney who finished 6th for $120,165. He was followed to the rail by Aden Salazar who claimed 5th place for $161,239.

There were two Brazilians at the table, the other being Dante Goya who was knocked out in 4th place by his fellow countryman. Goya earned $219,472 for his efforts.

Ryan Riess entered the final table as the shortest stack but managed to extend his stay through to three-handed play. The WSOP 2013 Main Event champion walked away with $302,980 as the 3rd-place finisher.

A Boost for Poker in Brazil

Simão held a 2-1 chip advantage over Gierse when heads-up play began but not long after, the Brazilian found himself enjoying an insurmountable lead. In the final hand, he raised his big blind with AdQsQh2s against Gierse’s AsJs10s9c. Both the turn and river showed two clubs, giving Simão his second WSOP victory.

Simão said his win will once again boost poker’s popularity in his home country which benefits the game, the players and the poker world in general.