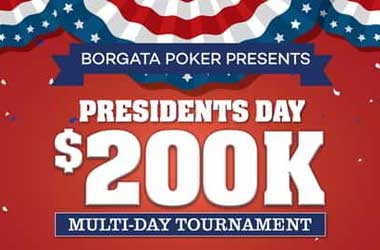 On Feb 20, Borgata played host to a major poker tournament in celebration of President’s Day.

The tournament had an entry fee of $400 and featured $200,000 in guarantees, becoming the first six-figure prize pool event that the Atlantic City casino has hosted since the pandemic. People came in droves to take part in the tournament but Borgata was unable to accommodate everyone, leaving many players frustrated.

Many Players Sent Home as Seats Filled Up Fast

The multi-flight $400 buy-in Presidents Day Weekend tournament was scheduled to kick off at 10 a.m. Sunday morning, but hundreds had already started lining up for one of the two starting flights as early as 7:00 a.m. The influx of players led to a long line that extended to the Old Homestead steak house, about a quarter-mile away from the poker room.

A second starting flight was scheduled for 7:00 p.m. on the same day buy plenty of players, many of whom waited for hours just to get a seat, were sent home as the casino could no longer accommodate the demand.

The registration fiasco caused an angry outburst on social media as players expressed their disappointment over what happened. Many of those who were unable to secure a seat were from far-away places and had driven long hours just to get to the casino. One player described the tournament as poorly organized and poorly advertised.

Some of those near the front reportedly sold off their spots for double the tournament buy-in.

When Borgata shut its doors during COVID-19 in 2020, it was forced to lay off hundreds of employees, including most of its experienced staff. Without enough dealers, the casino was unable to effectively handle the huge demand during Sunday’s tournament.

There hadn’t been any major poker events in the area over the past couple of years, and that’s why it wasn’t entirely surprising that many showed up at the casino in hopes of securing a seat into the $200K GTD tournament.

Borgata could have done something to avoid the long queues, such as allowing players to pre-register online, but the casino failed to anticipate the massive turnout. The damage has been done and what Borgata needs to focus on right now is how to win back those disappointed players.