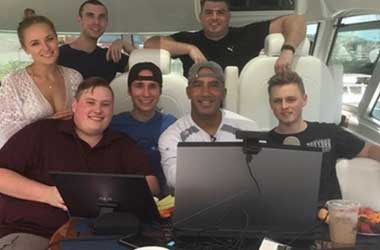 High stakes poker pro Bill Perkins set a prop bet a year ago with brothers Jaime and Matt Staples that he would give them $150,000 if they could get to the same weight within a 12 month period.

This was a challenge since Jaime weighed around 304 pounds and Matt weighed just 134 pounds when the prop bet was made. Perkins offered them 50 to 1 odds as it was a pretty difficult challenge.

Brothers Get The Job Done In 12 Months

Prop bets are an interesting part of the poker industry, with many players offering each other these side bets just to make things more interesting. Perkins is known for setting up some unique and outlandish prop bets.

The Staples accepted the bet and put down $3,000 of their money on the bet, which meant they had a chance to win $150,000. Jaime agreed to the bet because he thought that it was a win-win wager – even if he didn’t manage to reach the exact weight of his brother, he would have still managed to have lost a decent amount of weight in the process of trying.

Just booked the craziest bet of my life. @PokerStaplesPA and I need to get within 1 pound bodyweight in one year. Our 3K to @bp22 150K

One year later, the Staples brothers have managed to make the same weight. They officially weighed in on March 25 at RunItUp Reno event in Nevada which was held by Jason Somerville. The results were verified by Jeff Gross and the two brothers recorded the same weight of 188.3 pounds. This meant that Jaime lost more than a hundred pounds, while his brother Matt gained more than 50 pounds.

We did it. We won the ultimatesweat bet and 150k. I feel so surreal right now.

Thanks to @matthew_stapless @bp22 @mikevacanti friends and family, @beccarr94 and of course all of you rooting us on every day. Inspiring me to be better. Thank you ❤️ pic.twitter.com/Yg6IpfLv5y

Staples’ Brothers Put In A Lot Of Effort To Win

The drop in weight is a result of a lot of hard work and effort by both brothers. Jaime did it by being consistent with his weight loss regimen. As Jaime puts it, it is developing a skill set of turning the basic knowledge of weight loss into action.

One important piece of weight loss info for Jaime was understanding and learning how to count macros. This allowed him to pack in more food into his 1,300 calorie plan and proceed with his weight loss regiment while Matt worked on increasing his weight and spending time in the gym.

Since the beginning of the bet, the two brothers have been on a globe-trotting tour. They have lived in six different countries and attended five tournament stops. Both brothers attribute to the prop bet the several life-changing decisions they have made in the past year, to both win the wager and improve their lives.