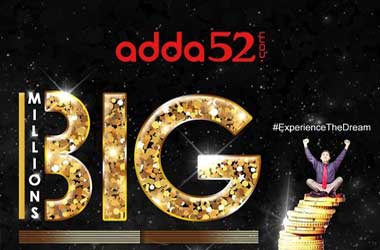 Adda52 decided to host a unique poker tournament called ‘Big Millions’. This was a unique tournament because it was the first Indian online poker tournament to have the final table hosted live. The online tournament commenced on March 5 and received a great response from poker players in India who had to shell out 11,000 rupees for the buy-in to get a crack at the 1 crore rupees guaranteed prize pool.

The final table took place on March 10 and was streamed via multiple social media channels including Facebook. The live stream was a great success as the Hindi commentary provided by top names in the Indian poker industry helped boost live stream coverage. Some of the poker commentators included Manish Adnani. Abhishek Goindi, Pulkit Totla and Aditya Sushant.

Kalyan Chakravarthy stood firm during the final table and was crowned the winner of the Big Millions event and took home a cash prize of 28.50 lakh rupees ($43,800). Shashwat ‘shash26’ Agarwal from Kolkata finished in second place and took home 15,48,650 rupees while third place went to Deepak ‘orionn7’ Raina who won 10,39,875 rupees. More than 100 poker players who took part in the Big Millions finished in the money.

Adda52 was pleased with the response and success of Big Millions and has plans to come up with similar events to boost poker in India.

In a statement, Mohit Agarwal, co-founder of Adda52, said

We are known as the “Poker People” in India, the ones who kick-started the Poker revolution. This year we wanted our players to be revolutionized a step further… and give them a life changing tournament, in terms of both, prestige and money. With Big Millions, we achieved it!