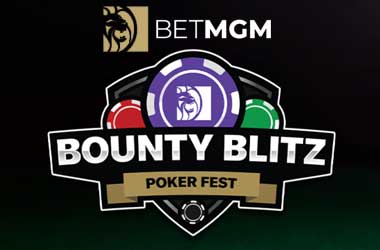 BetMGM Poker is hosting another huge online poker festival this February across all three of its US markets.

Players in New Jersey, Michigan, and Pennsylvania will get a shot at almost $750,000 in guaranteed prize pools in the Bounty Blitz Tournament Series which will kick off on February 20.

BetMGM Poker’s latest tournament offering is designed for players and fans of the knockout format which has grown in popularity over the years. In a KO tournament, each participant has a cash bounty on their head. With each opponent you eliminate, you win a cash prize. This means you get to take home extra cash apart from the regular prizes on offer.

Each state will have 24 tournaments running for eight days, until February 27. New Jersey has the biggest guarantee at $289,000, followed by Michigan which guarantees $229,500, and Pennsylvania where players will compete for $219,500 in guaranteed prize money. All in all, there’s $738,000 in guarantees offered throughout the series across NJ, MI, and PA.

The schedule will be very similar across all three states, with buy-ins starting from as low as $35. BetMGM will also be running satellites for the key events.

The festival culminates in the Main Event, with $75,000 guaranteed in New Jersey, and $50,000 in prizes up for grabs in both Michigan and Pennsylvania.

Bounty Blitz is BetMGM Poker’s second tournament series of the year, coming on the heels of the Double Trouble Series which awarded more than $300,000 in prize money across the three states in late January.

Bounty Blitz also marks the second time that BetMGM is hosting a knockout-exclusive tournament series. The operator closed out 2021 with the successful New Year Knockout Weekend which featured a slate of progressive knockout tournaments. This time around though, the bounties are fixed.

Players can take advantage of an ongoing promotion on BetMGM Poker to enhance their bankroll ahead of Bounty Blitz. The Pick-A-Card promo gives players the chance to win up to $50 in free bets daily until February 27. To take part in the promo, players only need to earn 25 loyalty points by playing real money poker games, either cash games or tournaments, on BetMGM Poker.