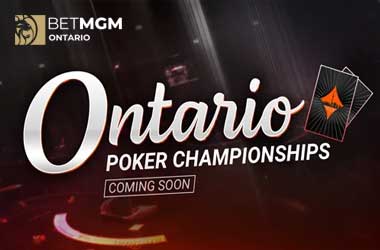 BetMGM Poker Ontario will finally host its first online tournament series since launching in the Canadian province back in April. The festival will be named “Ontario Poker Championships” as shown in a new tab recently added to the client.

At the moment, no further details can be found on BetMGM Poker’s website in relation to the series, but a “Coming Soon” teaser suggests the festival could take place over the next few weeks, most likely in September or early October.

Since BetMGM Poker Ontario hasn’t run any tournament series in its nearly five months of operations in the province, it’s quite difficult to give exact predictions in terms of the size of the festival and the guarantees that will be offered. However, given the “Championships” label, we can expect BetMGM Poker’s inaugural series in Ontario to be huge and prestigious.

The upcoming Ontario festival is expected to be much bigger than the recent online tournament series hosted by BetMGM across its US poker markets, the Summer PKO Fest, which featured 25 events and $480,000 in guarantees. This is mainly because Ontario surpasses any of the three US markets in terms of market size.

Apart from that, BetMGM Poker’s status in the Canadian province of Ontario also improved significantly. It grabbed the lead from PokerStars earlier this month and while it’s now in second place, it could very well return to the top spot at any time.

The Ontario Poker Championships could feature up to $1 million in total guaranteed prize pool, with players likely to compete in 30 to 50 individual events. As is the case in any tournament series, the schedule will be headlined by a Main Event which could come with a six-figure guarantee.

The festival will likely compete with PokerStars’ Ontario Championship of Online Poker (ONCOOP) which is also expected to take place in September or early October. ONCOOP will be the operator’s third tournament series in the province since going live there in June.

It hosted its first series, the Ontario Platinum Series, in July. 888poker is also currently running its first online poker festival in the province.

The excitement is now building up among players on BetMGM Poker Ontario as they wait for an official announcement from the operator.