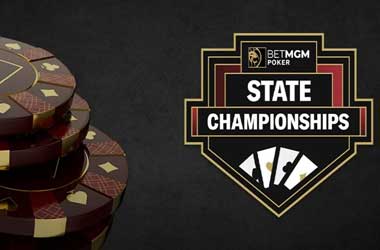 BetMGM Poker will run its biggest-ever tournament series this September. The “BetMGM Poker State Championships” features $2 million in guarantees and will take place from September 15 to 25 across the online poker room’s three US markets – New Jersey, Michigan and Pennsylvania.

The upcoming series is the largest to date in BetMGM Poker history, offering more than $2 million in guarantees spread out across 26 individual events. The operator has enjoyed great momentum over the past three months which served as motivation for the team to put together its most ambitious online poker series yet.

BetMGM’s Director of Poker Luke Staudenmaier said 2022 has been a transformational year for the online poker room and we couldn’t agree more. In June, the operator ran its first live event at ARIA which was a massive success.

Meanwhile, its online poker operations in the US have been enjoying significant growth. In particular, its Michigan site recently grabbed the top spot from PokerStars and it continues to perform well in the Wolverine State.

BetMGM took this as inspiration to “push for new heights“, according to the company’s press release.

The series will simultaneously run in New Jersey, Michigan, and Pennsylvania and the guarantees on offer slightly differ for each state. The New Jersey Series features the biggest guarantee of $795,000, followed by the Michigan edition ($680,000), and then Pennsylvania ($540,000). When combined, the festival is set to award $2,015,000 in total guarantees across more than two weeks of online poker action.

The schedule is comprised of four tournaments with buy-ins of at least $1,000, including the $2,500 High Roller which takes place on September 18. The series will culminate in the 8-Max Championship where players in all three states will compete for a huge $600,000 guarantee.

Some NLHE 8-Max Phase tournaments are also added to the line-up which players can enter for $100. Players can get in via daily flights and they must survive Phase 1 to advance to Phase 2 as no direct buy-in is available at this stage. These Phase tournaments come with at least $100,000 in guarantees.

BetMGM Poker will be running satellites for the key events with entry fees starting at $5. Players may check out the BetMGM website for the full schedule of the series.