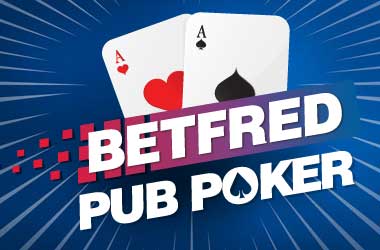 Always a Poker site that is going to offer their customers more, BetFred Poker has recently launched their very own Pub Poker League! This new concept means that you can now combine a night out at your local drinking hole and play Poker online against other Pub goers in that Pub!

BetFred have signed up a large number of locals throughout the UK and the number of Pubs taking part in the BetFred Poker League is growing each month. Finding your nearest Pub that offers BetFred’s Poker League is relatively straight forward as all you have to do is visit the BetFred website, click on the Pub Poker link and then follow the link to the Pub Locator, enter your Post Code and a listing of all Pubs local to you signed up will then be listed.

The BetFred Poker League runs in 13 week cycles and as such your team will be hoping to make it through to the end of the season with a high enough score to enable them to make it to the Grand Final held on the last week.

The player in each Pub who manages to win the highest number of points is then entered into the Grand Final and this is where they have a chance of playing for a prize pool worth a whopping £10,000, which isn’t bad for a Free to enter set of weekly tournaments!

If you do not manage to finish as the highest scoring Poker player in your local Pub offering the BetFred Pub Poker League you can still win a free entry into the Grand Final, as players ending the season in 2nd to 5th place will be able to fight it out for a place in that Grand Final!

If you want to learn more or get your local Pub’s Landlord to get the BetFred Pub Poker League up and running in that Pub then visit the BetFred Poker website where the full details of how this can be done can be found!