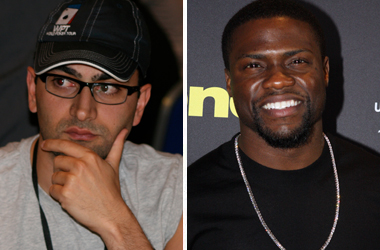 Those who follow professional poker are undoubtedly familiar with Antonio Esfandiari. Nicknamed “The Magician”, the 39-year-old has seen 10 final tables and taken home 3 bracelets at the World Series of Poker.

He’s also been to 6 final tables and has claimed 2 bracelets on the World Poker Tour.

Antonio is noted for having won the largest single payout in the history of poker when he won the “Big One for One Drop” tournament in 2012. He took home a staggering $18,346,673.

TMZ Sports recently caught up with Esfandiari and they were looking for some juicy gossip as Esfandiari has been known to do some crazy things. The poker pro gave them what they were looking for when he announced that he is planning to step into a boxing ring next March. His opponent? Well, it will be none other than 39-year-old celebrity Kevin Hart.

Hart, who has had a very successful career in movies and television has an uncanny ability to make people laugh but this fight is apparently no joke. Hart is also a very close friend to Dwayne ‘The Rock’ Johnson.

It appears that Esfandiari and Hart were hanging out together a few days back when the topic of boxing came up. One thing obviously led to another and they agreed to meet in the ring for what is described as a full-on fight. Kevin Hart stands a diminutive 5’4” and weighs just over 140 pounds but he is well-known to push himself to the limits when it comes to his insane workout routine. The guy’s in shape! Meanwhile, Esfandiari is about 5’6” and weighs in at about 156 pounds.

Esfandiari Will Go In As The Underdog

Despite a distinct advantage in the size and weight departments, Antonio claims that he will be a 35:1 underdog going into the match. He didn’t say how much he was betting on himself but he did acknowledge Hart’s superior athleticism, speed, and devotion to fitness. Antonio certainly has a lot of work to do if he plans on cashing in his bet.

This fight might not have the same cache as the battle-royale between Conor McGregor and Floyd Mayweather. Esfandiari did not confirm if this stunt was being carried out to raise funds for a charity or was part of another ridiculous prop bet. Bookies are expected to start taking bets for the fight which takes place in 8 months’ time.