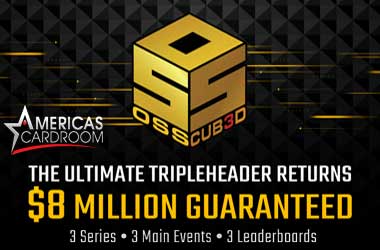 US-facing site Americas Cardroom has been heating up the poker world this winter. Their OSS Cub3d began running on February 10th, with the 3-part tourney series offering over $8 Million in total guaranteed prize pools!

If you’re one of our loyal readers, then there’s a good chance you’ve already played in the OSS Cub3d.

If not, you’re still in luck as most of the biggest events are remaining.

There is a $1 Million guaranteed tourney this Sunday, March 3rd at 3pm ET. It’s the Main Event of their flagship Online Super Series (OSS) and comes with a $540 buy-in. You can also qualify for far less via satellite.

Then running from March 4th to 10th is the Bigger Online Super Series. Nicknamed the BOSS, this series is designed specifically for high rollers with $3.2 million guaranteed over just 25 events. It will culminate with its own $1,000,000 GTD Main Event on the final day at 1pm ET. The buy-in for that is $2,100.

The OSS and BOSS also have a separate leaderboard awarding seven total seats ($2,650 value each) to their $5 Million Venom Tourney on July 21st. This will be part of poker history as it’s the biggest online tournament ever hosted by a U.S. Facing Site.