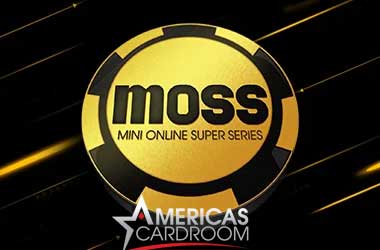 November is turning out to be another good month for online poker players, with plenty of major festivals running on various online real money poker sites. The latest to launch their own tournament series this month is Americas Cardroom (ACR), which is currently hosting a “Mini Online Super Series” (MOSS) guaranteeing a massive $2.5 million!

The festival which features a total of 150 events started on November 22 and will run till December 7. The schedule comprises of a wide array of buy-ins, starting from as low as $0.25! There’s also a diverse set of variants and formats to enjoy, including PLO, PKO, 6-max, 8-max, 7-Card Stud HiLo, PLO8, Super Stack, Mega Stack, Turbo and Bounty.

The MOSS kicked off with a $15 buy-in KickOff event, which came with a $125,000 guaranteed prize money. There are dozens more waiting to take place, with a handful of them offering the biggest prizes. Below are some of events you shouldn’t miss:

The schedule features not just one, but two Main Events, each offering a cool $250,000 guarantee for a buy-in of only $55! Both are multi-day events and will take place separately.

There are tons of freerolls and satellites running, giving players the chance to win big without spending a penny!

ACR is also hosting a couple of “Fight Club” events, both featuring a total of 20 starting flights between them. Players will compete for $25,000 in guarantees in each event, for an entry fee of $9 ($6 goes to the bounty, $3 into the buy-in). Those keen on taking part should clear their schedules on November 28 & 29, and December 5 & 6, because that’s when Day 2 runs for both events respectively, until a winner is crowned.

Players kick off the action with 50,000 in starting chips, with blinds increasing every seven minutes. Late registration is open until Level 12. To find out more information, check out the ACR website.