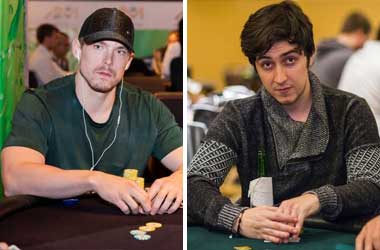 The star-studded line-up for the $25,000 PokerGO Tour Heads-Up Showdown has just been announced, and it includes no less than poker legends Daniel Negreanu, Phil Hellmuth and Erik Seidel.

But probably the most interesting part of the competition would be the potential matchup of Alex Foxen and Ali Imsirovic, both of whom recently made headlines over cheating allegations.

A total of 32 players, some of the best in the world, will take part in the tournament. They will initially be split into four brackets, with each bracket comprised of eight contestants. The line-up includes players in the top 16 on the PokerGO tour rankings.

Players will be pitted against each other through a series of heads-up matches and whoever wins will advance to the next round until just one player remains. A champion will be declared on April 23.

The first round of heads-up matches will see four-time World Poker Tour (WPT) champion Darren Elias battle it out against the young, promising poker pro Landon Tice, Erik Seidel versus slowroller Dylan Gang who is known for his poker pursuits on Hustler Casino Live, and Negreanu against American poker and major card collector Jared Bleznick.

The 16 first-round matches will kick off at noon on April 21 at the PokerGO Studio in Las Vegas. The next round will take place the next day at noon, with the quarterfinals taking place on the same day at 4pm. The last two stages of the game will be completed on April 23 during which a winner will also be crowned.

The tournament hits the climax in the championship round which could potentially reignite the rivalry between Negreanu and Hellmuth, who faced each other on High Stakes Duel last year. The final match could also be between Hellmuth and Shaun Deeb who is working on breaking The Poker Brat’s World Series of Poker (WSOP) record.

But what will attract the most attention will be the potential showdown between Foxen and Imsirovic and it’s because of the latest cheating accusations that have emerged on social media.

In a series of tweets, Foxen has accused Imsirovic of cheating both live and online. The two-time GPI Player of the Year alleged that Imsirovic was banned by GGPoker for using RTA and that he rubbernecked Paul Phua’s hole cards during the Super High Roller Bowl (SHRB).

Ali opens the CO with Ah9c. Then quite visibly looks down at Paul Phua's hole cards, Ad5. The actual footage makes it even more clear than this screen shot. Paul folds and Addamo defends the BB. Ali cbets and gets raised on 642ddd, sticks in a 3bet and wins the hand. pic.twitter.com/aIhQw4Hqv4