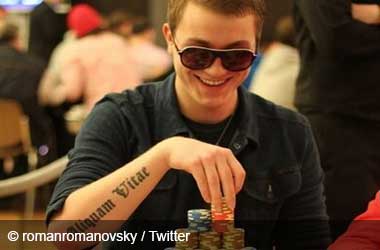 888Poker’s XL Eclipse online tournament turned out to be a great success for the second biggest online poker website in the world.

The online tournament had a total of 34 events and ran from Sep 13 to 23 attracting top online poker players from different parts of the world.

A field of 710 players competed in 888poker’s XL Eclipse $1 million Main Event and it was Ukrainian poker pro Roman ‘Romeopro33‘ Romanovskyi who ended up being crowned the champion and walked away with $187,500. It was a heated heads-up battle between the Ukrainian and Sweden’s Simon ‘Isildur1337x‘ Mattson who held the chip lead during much of the final table only to finish second for a $135,000 payday.

After late registration had closed, there were around 90 places that would pay out. At about the six-hour mark of the day, the players were at level 21 when ‘pullztrigger‘ was sent packing on the bubble leaving the rest of the field guaranteed at least $2,600. After the bubble had popped, the play opened up and players began to fall in rapid succession. The game significantly slowed and became tighter after the tournament had been thinned out to five tables. Players were finally seated at the final table during level 32.

The top stable of 888poker pros were in attendance and they included the likes of Chris ‘888Moorman‘ Moorman, Sofia ‘sofialovgren‘ Lovgren, Dominik ‘888Dominik‘ Nitsche and Parker ‘888tonkaaa‘ Talbot all showed up for XL Eclipse.

‘NumbeeerONE‘ was the first player to get knocked out at the final table. ‘NumbeeerONE‘ first lost a chunk of chips when running into ‘Isildur1337x‘s pocket aces with an ace-queen. A few hands later, ‘NumbeeerONE‘ ended the day after taking a king-nine into battle with ‘wisimaki‘s big slick. It was then Kamcumir’s turn to leave after failing to hit a nut flush draw against a pair of queens.

Felipe ‘mr.salgado‘ Salgado then fell and was followed by ‘StuntSoHard‘. ‘NitGMmator‘, who was playing well throughout the day, moved all-in with an ace-queen only to get sent packing by ‘Isildur1337x’s pocket rockets. It was then down to the final two players. The chip lead alternated between the two players but ‘Romeopro33‘ found himself with pocket aces and ‘Isildur1337x‘ bit and the Main Event came to a close with ‘Romeopro33‘ finishing on top.