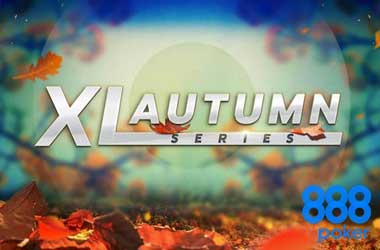 When 888poker announced its XL Autumn series, a lot of players were surprised as the online poker operator went really big with the XL Autumn Main Event. The Main Event for the XL Series generally carries a $500k guarantee but 888poker decided to double it and go with a $1 million guaranteed prize pool.

There were some sceptics who felt that 888poker had overdone it with its $1 million guaranteed Main Event and end up with an overlay. 888poker which was one the second biggest online poker operator in the world has not made a lot of noise in the market recently.

This $1 million XL Autumn Main Event was a way of making some noise and the operator did that by not only meeting the guaranteed amount but surpassing it as well. The Main Event had a $1050 buy-in and needed close to 1,000 registrations to hit the guaranteed prize pool.

The Main Event received a total of 948 registrations and an additional 81 in re-registrations which brought the total prize pool to $1,029,000. One of the reasons 888poker was able to hit this guarantee was because it ran multiple Day1 flights that kept the players coming in.

The final day of the tournament got over rather quickly as it took only 5 hours on Day2 for the Main Event to play down to a winner. A user with the handle ‘23NoraB’ ended up winning the Main Event and took home a decent cash prize of $185,200.

888poker will be happy with the success of the Main Event and could end up trying out similar prize pools for its XL Series Main Events going forward.

The XL Autumn series overall went off well, especially when you take the Main Event into consideration. However, there were quite a few events that ended up in overlays. 888poker put together a total of 44 events for the XL Autumn series and had a combined $2 million in prize money up for grabs.

The opening event of the series was a flop as it ended up falling short of its $100,000 guarantee while the $200K Tune Up high roller event did not meet its $200,00 guarantee. However, overall 888poker will be happy with the results as the operator paid out a total of $2.3 million in prize money, which is $300,000 more than the guaranteed prize pool.