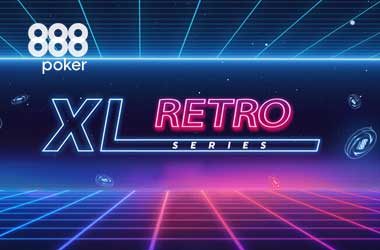 888poker is bringing back some classic tournament favorites in the upcoming XL Retro Series!

The retro-themed festival, which runs as part of the operator’s 20th-anniversay celebrations, features more than $1.7 million in guaranteed prize money spread out across over 60 tournaments running from October 9-25.

The entire schedule is filled with old-school tournaments but with huge guarantees. There are a total of 27 numbered tournaments, with buy-ins ranging from $11 all the way up to $2,100. Numerous side events will also be running throughout the series. All in all, players will compete in 62 events across more than two weeks of exciting online action, with $1,751,500 in total guarantees up for grabs.

The main highlight of the series is the Main Event which offers the biggest value among all tournaments on the schedule. For a buy-in of $250, players get the chance to win a share of the huge $500,000 guarantee. The tournament has multiple Day 1 flights running from October 20-24, some of them adopting Turbo and Hyper Turbo structures.

Apart from the Main Event, players will also not want to miss the first event of the festival, the Mega Deep Opening Event, which costs $109 to enter and offers $120,000 in guarantees.

While the XL Retro focuses on old-school tournaments, it has a bit of a modern touch as well with the addition of a Mystery Bounty event which features the second-biggest guarantee of the series. As we all know, the format has taken the poker world by storm recently and has now become a staple in various major tournament series both live and online.

October is a busy month for 888poker as it is also sponsoring a live festival in Malta. The 2022 Battle of Malta kicks off on October 5 and runs until October 12, culminating in the Battle of Malta Main Event which gets underway on October 9, the opening day of the XL Retro Series.

The site also recently hosted a hugely successful online festival, the ChampionChip Games, which wrapped up on September 6. The series, which catered to low-stakes players, ended up attracting nearly 25,000 entries to generate almost $550,000 in total prize pools, surpassing its $500K guarantee which the 2021 ChampionChip Games failed to do. It won’t be surprising if the XL Retro Series will also exceed expectation.