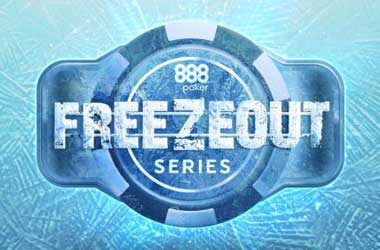 An online festival exclusive for players and fans of the freezeout structure is taking place next week, courtesy of 888poker!

Freezeout used to be the most popular poker tournament format, but nowadays it has been overshadowed by re-entries and rebuys. However, many players still prefer the freezeout structure, with some of the world’s top poker pros even calling for re-entries to be scrapped altogether and resurrect freezeout tournaments. 888poker now leads the way in making this happen by hosting the Freezeout Series.

The upcoming festival features events with buy-ins ranging from $5.50 all the way up to $109, meaning you still get the chance to compete for decent prizes of at least $10,000 with a small investment. If you’re willing to take your game to the next level, you can even win a share of guarantees worth up to $200,000!

The online series is expected to attract thousands of freezeout fans, but if you are new to this structure, you need to adjust your gameplay as you will only be given one shot at winning. Your bid is over once you run out of chips. The only exception is the Freezeout Series Main Event which will feature multiple starting flights.

The Main Event has a buy-in of $109, with a cool $200,000 in guarantees up for grabs. 888poker has yet to reveal the actual number of Day 1s for this event, but it’s understood they will still be played in freezeout format, and players will kick off the action with 10,000 in starting chips, with blinds at 25/50/5a, played in 20-minute levels. The flights will begin on June 14.

Each starting flight ends upon the conclusion of level 12. Take note that there will be no direct buy-in for the Main Event. You need to go through Day 1 to advance to Day 2 which takes place on June 29.

The full schedule features other traditional tournament formats such as 6-max, 8-max, and 9-max, as well as Deepstack and Progressive Knock-Outs. Majority of the events are standard NLHEs.

The $675,000 guarantee may pale in comparison to the astonishing multi-million tournament prize pools offered by other real money online poker operators, but considering that the festival is mainly dedicated to the low-stakes grinders, that figure brings great value.

For the full schedule and details of the Freezeout Series, check out 888poker.com.