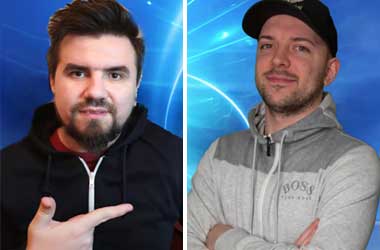 888poker has recently added two new members to its Stream Team. Rene “renemastermix” Majed and Andrei “andreicoz” Cosmin who hail from Germany and Romania respectively, are now part of the group tasked with expanding 888poker’s presence on Twitch.

888poker’s Stream Team was launched back in July 2021 with five members from Canada, Portugal, and the UK, namely, David Gibson, Adam Tocholke, Ricardo Mateus, Nick Eastwood and Josh Manley. Two months later, Canadian Jordan Banfield was added to the roster. The group is headlined by Brazilian poker pro Vivian Saliba who has been an 888poker brand ambassador since 2017.

The addition of Majed and Cosmin to the team will further strengthen 888poker’s online presence, as the company strives for more growth this year.

Majed only began streaming poker on Twitch in 2020, but he has already been playing poker as a hobby for over a decade. Over the past two years though, he’s been taking the game more seriously. His streaming journey started with a bankroll of $1,000 and a maximum buy-in of $11. Now, he’s competing in MTTs with buy-ins of up to $10,000.

Majed says he’s delighted to partner with 888poker, his first time to work with a major operator.

Cosmin was introduced to poker almost by accident. His bio in the 888poker eMagazine says that the Romanian developed his passion for the game after stumbling upon a poker video on YouTube while alone at the office over Christmas in 2017. Starting with just $100, Cosmin managed to grow his bankroll to $10,000 in 2019 by playing cash games and he continues to move up the stakes with his skills and determination.

Cosmin said he’s already been following some of the members of the team even before becoming a member himself. The 32-year-old couldn’t be happier to finally join them, promising to bring his best to the team.

While many operators have decided to cut their streaming and ambassador roster, 888poker is going in the opposite direction. It continues its efforts to expand its reach by adding more ambassadors, the latest being British professional boxer Chris Eubank Jr. who joined the site in early 2022.