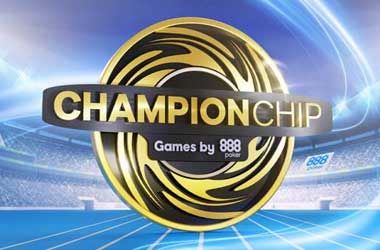 The ChampionChip Series has officially kicked off on 888poker. The festival is now well underway, featuring 25 action-packed events which will run until August 16. Overall, players will compete for $700,000 in guaranteed prizes throughout the athletic-themed series, $500K of that goes to the multi-day Main Event.

The schedule features a wide range of formats, including PKO, PLO, 8-handed/6-handed tables, Rebuys, Deepstack and many more, with buy-ins starting at $2.20.

Players can choose which tournaments to play according to three buy-in tiers: Low, Medium, and High.

The first events on the schedule are already in the books, and the results have been positive so far. The first tournament, the $33 buy-in, $30K GTD Opening Ceremony, managed to smash its guarantee by an impressive 33%. The event attracted a total of 1,374 entries including 321 rebuys to generate $41,220 in total prize pool.

The two smaller events on the opening day failed to hit their targets, but the $4,000 in rake earned by 888poker from the Opening Ceremony alone helped cover those overlays. The losses from the High Jump and Triple Jump games weren’t that huge anyway, with both tournaments missing by just over $2,000.

The second day of the series was generally successful as well, replicating the results of the opening day. The $22 buy-in Boxing event awarded a total of $17,100 in prizes to the winners, surpassing its $15K guarantee.

There are still a number of events yet to play out, but all eyes will be on the Main Event, the biggest-guaranteed tournament of the series.

Starting flights for the $50 buy-in, $500K GTD Main Event have begun on July 18 and will run through August 15, with the final action taking place on August 16. The event needs to attract nearly 11,000 entries to hit its target, and that’s quite achievable, with more than 4,000 players now vying for a Day 2 seat. So far, almost 700 players have successfully secured a seat into the final day.

Day 1s for the Main Event are still running on 888poker and players still have a few more days to take a shot. They can even win their way into the tournament for free via ChampionChip Freerolls taking place on a daily basis.

To get the latest updates on the ongoing series, you may follow the action on 888poker’s Twitch channel handled by the site’s new stream team.