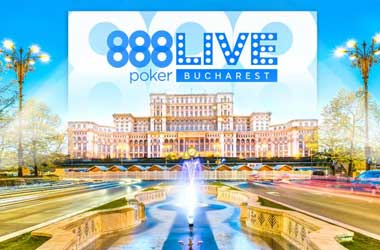 After holding successful live events in London and Barcelona, 888poker will head to Bucharest, Romania for its next stop in 2022.

The action continues at the 888poker LIVE Bucharest Festival which will run from June 20-26 at the 4-Star Marriott Sheraton Bucharest Hotel.

The week-long 888poker festival will culminate in the €888 buy-in Main Event which gets underway on June 22. Players can enter via three starting flights running each day from June 22 until June 24. Surviving players will battle it out for two more days until a winner is crowned on June 26.

Those players who are keen on entering the main highlight of the series, the €888 buy-in Main Event, get the chance to secure a seat for a cheaper price by participating in live satellites which come with an entry fee of only €115.

There’s an exciting Main Event package on offer for those participating in online satellites on 888poker. The package, which is worth €1,900, covers the Main Event buy-in, plus $500 for four nights’ accommodation at Sheraton Bucharest Hotel, and $400 for travel expenses. The package also comes with an 888Live Poker Kit.