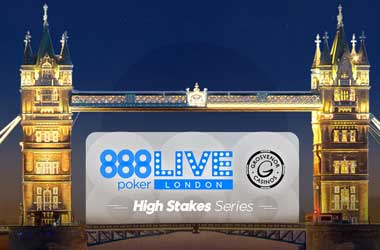 Fresh off the heels of its latest Live Weekend event at London’s popular Grosvenor Victoria Casino (The Vic), 888poker LIVE is returning to the legendary venue, this time to host a high-stakes poker series.

The main highlight of the festival is easily the £2,100 Main Event, but there are other key tournaments to watch for, including the £3,000 High Roller.

The last event hosted by 888poker LIVE at London’s The Vic took place back in February. Joe Hindry emerged as one of the biggest winners after he won the £444 buy-in Main Event for £60,000. A similar tournament was won by Bhavin Katri in January for £126,340.

The Main Event has three Day 1s and unlimited re-entries are permitted for each flight. Players kick off the action with a 20,000 starting stack played to 60-minute levels for the regular flight and 20 minutes for the turbo edition (Day 1C). As soon as the final table dwindles to just five players, the blinds then go down from 60 minutes to 30 minutes. Starting flights get underway on April 28, with the final action scheduled for May 1.

Those who can’t afford the £2,100 entry fee for the Main Event can enter the tournament for much cheaper through satellites. Players have two options – enter the live £225 cashout satellites at The Vic (April 20-26), or participate in online qualifiers running on 888poker for as low as $0.01. You may visit the 888poker website for the full satellite schedule.

The schedule features plenty of events with buy-ins not exceeding £500, such as The Voyage, Big Shot and a PLO tournament, but if you want to go much higher than that, the series also includes a £3,000 High Roller which kicks off on April 27.

There’s also a Seniors (50+) tournament scheduled for May 1, with the increasingly popular Mystery Bounty format also thrown into the mix. The tournament costs £225 to enter and also takes place on May 1.