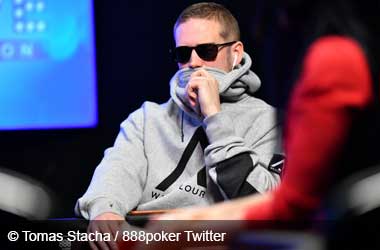 The 2018 888poker LIVE Festival London is one of the most popular poker tournaments in Britain.

The Main Event has come to a close and fittingly British poker pro and cash game specialist James Williams went on to trump a field of 656 entries and won £121,000.

A total of 21 players battled it out on the final day of the £1,100 Main Event. Several players were swiftly eliminated from the field in the first two levels. Things became very competitive after that and appeared in some ways like an endurance race which Williams won in the end.

The final day saw 21 players return to their seats hoping to get the lion’s share of the £649,449 guarantee. After a series of intense action, the number was quickly cut down to the last 13 finalists during the first two levels.

Among the hopefuls who were eliminated early on the final day were 888poker qualifiers Fuad Serhan, Martyn Duell, Kelly Saxby and Helmut Hauser. Hak-Hyun Lee put an end to Saxby’s bid, when his ace-king cracked Saxby’s pocket kings.

The remaining players had their first break and after that the action resumed. Christopher Kyriacou bowed out of the game, with a pair of eights being the culprit. Adnan Dacic’s hot run on the outer table also sent away Lam Van Trinh and Antonios Onoufrio. This left nine players battling it out at the final table.

The Main Event had a guaranteed prize pool of £649,449 and that meant that the winner would walk away with a 6 figure payout. Williams not only won £121,000 for his first place finish but he also received a trophy at the Aspers Casino at Westfield Stratford City where the tournament was held. It was a heads-up battle that took place in the final moments between Williams and recreational player and decorator Derek Lawless.

While French poker pro Antoine Labat ruled the late stages of Day 2, he failed to sustain his aggression. The 2018 WSOP Main Event 9th placer settled in 3rd place, taking home £57,140. Labat showcased his poker skills at the final table but did not manage to get through Lawless, who was his main opponent throughout the tournament’s final stages. Sweden’s Hak-Hyun Lee finished fourth, winning £41,000, while Adnan Dacic from Serbia was in fifth place with £31,000.

Lawless bluffed Williams with two gutsy moves, but the latter refused to give in. He stuck to his game play, showed immense confidence and was fittingly rewarded with the first prize.