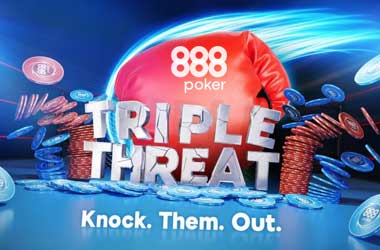 There are bigger prizes in store for players and fans of the progressive knock-out (PKO) format on 888poker. The online poker operator is boosting the prize pools for three Sunday PKOs as part of its “Triple Threat” promotion.

Buy-ins for the tournaments remain the same but there’s more prize money up for grabs. The promo began on November 3 and runs throughout the month, with the first set of tournaments attracting significant turnouts.

Not only that – any player who manages to cash in all three PKO tournaments will receive an extra cash prize of $1,000. If the entry fees are too high for you, 888poker is also running freerolls giving away tickets to these PKOs.

888poker is among the world’s oldest online poker sites and despite the intense competition happening in the poker market today with the entrance of new operators, it has remained a top choice among tournament players across the globe. The online poker room has one of the busiest tournament schedules out there, and it has managed to maintain player interest by running exciting promotions, upgrading its existing tourneys, and launching new offerings.

Earlier this year, 888poker unveiled a new weekly tournament schedule, adding an extra $500,000 to the prizes guaranteed each week. In addition to that, the operator also added lower buy-in tournaments, decreased the run times, and changed its payout distribution method so that a bigger percentage of players walk away with some cash.

The changes were accompanied by various promotions which gave away $200,000 worth of tournament tickets to players. Its daily branded tournaments, like Dash, 6-Max Mayhem, PKO Rumble, Voyage and The Big Shots are also very popular among players.

888poker remains consistent in improving its tournament offerings, which is why it continues to attract tournament players and has managed to keep its status as one of the world’s leading online poker sites.