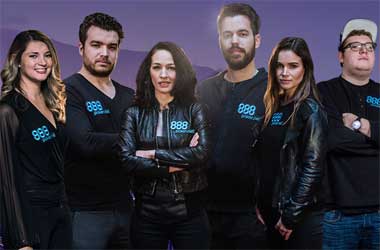 The online poker site recently asked its team of expert players to reflect on their achievements in 2017 and to also share what poker goals they wanted to accomplish in the New Year. Most of the 888poker ambassadors were pretty happy with how they performed on the 2017 poker circuit.

Chris Moorman was one of 888poker's big winners when he managed to win his first World Series of Poker bracelet in June 2017. This was something that Moorman wanted to accomplish for close to a decade now.

Kara Scott also felt she met her goals by doing her monthly Poker Brief for 888, while also expanding her live coverage of events.

Vivi Saliba and Natalie Hoff are ambassadors who felt that their technique evolved for the better in the past twelve months. Sofia Lovgren met her secondary goal of playing poker 20 days per month, though she fell short of achieving her primary goal of winning a major tournament.

When it comes to their poker goals for 2018, most of the poker pros have set lofty goals but are committed towards the grind to achieve them. Hoff hopes to continue working on her game and become good enough to win a WSOP bracelet while Saliba wants to win a WSOP event and also has aspirations of picking up a WSOP bracelet. Dominik Nitsche who lit up the poker circuit in 2017 wanted to continue his same performance into the New Year.

In a statement, Nitsche said

I never know what to say when people ask me about my New Year’s resolutions. I never try to change anything in my life simply because it's a New Year. Anything I want to change, I try to change as quickly as possible rather than wait for a New Year to begin. So, if you define resolutions as my goals for the immediate future, I'd have to say it's just to continue studying and improving at poker. My goal is also to keep putting a lot of volume in high roller events

As a part of these revealing end-of- year discussions, each ambassador also revealed who they thought would make a big splash in the poker world this coming year. There was a surprisingly easy agreement among 888poker's ambassadors as Dominik Nitsche received the most votes.