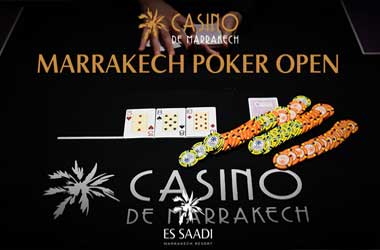 The Marrakech Poker Open will be back this year, and it will take place at the popular Casino de Marrakech from September 2 – 11.

The festival will feature a total of 23 tournaments available in a wide range of buy-ins.

It isn’t the first time that Casino de Marrakech is hosting a huge poker event. In 2019, it played host to the WPTDeepStacks Main Event which attracted a 545-entry field, ultimately topped by Spanish poker pro Alejandro Roman who took home DH 1,100,000 ($114,880) in first-place prize.

In 2020, just before the pandemic, the venue was among the stops of the World Series of Poker (WSOP) International Circuit. The Casino de Marrakech schedule was headlined by the DH 15,000 buy-in Main Event which was won by Italian player Samiyel Duzgun for DH 1,600,000 ($169,018).

Players kick off the action with a 30,000 chip stack played to 40-minute levels. Players are allowed to re-enter until Level 10. The winner will be crowned on September 11.

Players may also get their teeth into some interesting side events, such as a Monster Stack event, a short-handed tournament, a classic bounty, and a progressive bounty. These events have buy-ins of between DH 2,300 and DH 6,000.

The festival will conclude in a Turbo Deep Closing Event which comes with a buy-in of DH 2,000.

Those interested to participate in the upcoming festival can take advantage of multiple hotel packages being offered by the organizers. Special room rates are up for grabs at Sofitel Hotel, El Andalous Hotel, Es Saadi Hotel, and Es Saadi Palace. Players can also benefit from discounted prices with free tournament tickets.

Among the packages on offer is the MPO VIP Pack at Es Saadi Palace wherein players can enjoy six nights’ accommodation from September 6-12, and a free seat to the High Roller tournament or Day 1B of the Main Event.