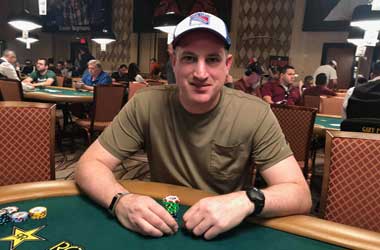 The special live finale of the 2020 World Series of Poker (WSOP) Main Event is just around the corner. Less than a week from now, we will find out who will ultimately be declared as this year’s official 2020 WSOP Main Event champion.

The international portion of the tournament was topped by Argentina’s Damian Salas, while the nine finalists of the US leg are set to travel to the Rio in Las Vegas on December 28 to determine a winner. Among them is Gershon Distenfeld from Bergenfield, New Jersey.

Distenfeld currently serves as the co-head of Fixed Income and Director of Credit with AllianceBernstein, a leading investment management and research company. His love for poker began during the Chris Moneymaker era where he would watch the game on TV. He eventually learned more about the game and put his skills to the test by playing in casinos.

What draws Distenfeld into the poker is the fact that his professional skills are somewhat transferrable to the game. With a strong background in behavioral finance, the 44-year-old is able to apply his financial knowledge while playing at the poker tables. Based on his experiences from both worlds, knowing how to effectively take advantage of the weaknesses of your opponents is the real deal.

Distenfeld considers himself a recreational player who would spend a week playing at the WSOP each summer, but this is the first time that he took part in the Main Event. His Hendon Mob profile shows he has accumulated more than $10,000 in total live earnings thus far, but that figure is bound to change when the final table plays out on December 28.

Interestingly, Distenfeld will turn 45 on December 30, the exact same day when the special heads-up finale takes place at The Rio. If he ends up winning the domestic final table, he’d be competing for his very first WSOP gold bracelet, the 2020 Main Event title, a hefty top prize, plus an extra $1 million, during his birthday.

Winning the tournament would no doubt become one of the best birthday gifts he would ever receive. If that happens, Distenfeld will get to home a lot of money, but the New York native plans to donate all of it to charity.

Distenfeld has pledged to give away his full WSOP winnings to his chosen charities, which include Minds Matter, Yachad, NCSY Relief Missions and Project S.A.R.A.H. (Stop Abusive Relationships At Home).

Each of the charities is already guaranteed to receive at least $10,000 regardless of Distenfeld’s finishing position, and if he ultimately becomes the 2020 WSOP Main Event champion, each of them would get up to $285,000.