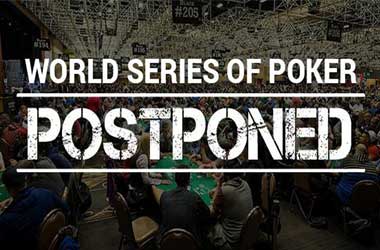 It’s finally official! The 2020 World Series of Poker (WSOP) has been postponed due to the coronavirus pandemic.

Many had anticipated that the festival would eventually join the list of other major poker events around the world that had to be postponed or cancelled as a result of the ongoing global health crisis.

Organizers confirmed that widespread anticipation in a presser earlier this week!

Disappointed WSOP players and fans can still take comfort in knowing that there might still be a 2020 edition, taking place during the fall. Ty Stewart, WSOP Executive Director, said they remain committed to holding the 51st edition of the festival this year, but they needed to prioritize the health and well-being of their staff and guests during this difficult time.

The cancellation of major events worldwide started in January, when the coronavirus began to spread to other countries. During that time, the deadly virus was wreaking havoc in China and other Asian countries, leading to the cancellation of the Triton Poker Super High Roller Series Jeju leg, as well as several World Poker Tour events.

The virus spread on a global scale in the ensuing months, with more and more events being dropped. However, the WSOP fell short of confirming whether or not the event would take place as planned, with organizers saying they were continuing to monitor the situation, and that the schedule “remains intact” until further notice.

Most players in the poker community including Daniel Negreanu believed it would be impossible to hold such a massive event in the middle of this pandemic, with strict quarantine measures in place worldwide. The announcement made on April 20 did not come as a surprise to the poker world, and now players can finally start making changes to their schedules for the months ahead, knowing that there is no WSOP to look forward to this summer.

If the targeted fall schedule eventually comes to fruition, it will be the first time in 50 years that the festival is not held in the usual May-July schedule. There will still be a few questions that need to be answered in relation to how the WSOP will make adjustments, especially that the WSOP Europe is also scheduled to take place this fall.

In the meantime, everyone can expect that official WSOP competitions will now be moved online on WSOP.com and other partner sites during the summer. Further details will be released soon.