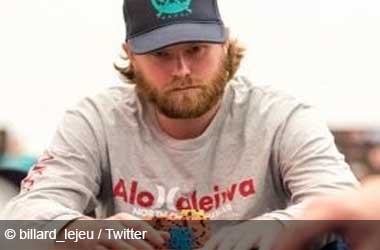 Billard endured a grueling final day and topped a field of 521 entries to win the top prize of CA$961,400.

Billard dominated the chip count early during the final day and he was the player initiating most of the action at the table, coming face to face with five other players. Canada’s Danick Landiault was the first to be eliminated after flopping middle pair against American player Kevin Rabichow‘s top pair. He took home CA$250,000 for his sixth-place finish.

The battle between the five remaining players took more than six hours with Billard still holding a comfortable chip advantage. Rabichow was mainly responsible for the next two eliminations. His double up put an end to Paul Fontan‘s quest for the title. The Spanish player exited the game in fifth place for CA$300,000. Alexandros Kolonias‘ passive play style did not work, and the Greek pro had to settle for fourth place after calling off a river bet from Rabichow. He took home $370,000.

This left the table with just three players – Billard, Rabichow and Finland’s Joni Jouhkimainen. They went for a 40-minute dinner break and then returned to discuss a deal. The negotiations resulted in the three players agreeing to ICM chop the prize money, with an additional CA$212,370 going to the winner. As the chip leader, Billard already earned CA$749,030, while Jouhkimainen and Rabichow both pocketed CA$583,310 and CA$578,990 respectively.

The three-handed play pursued for more than two hours with Billard continuing to build up a stack. Jouhkimainen bowed out in third place, leaving Billard and Rabichow in heads-up play, with the former still holding a healthy chip lead. After about an hour’s play, Billard came out on top and was thrilled to lift the MILLIONS LIVE trophy high up in the air.

The 2019 partypoker LIVE MILLIONS North America CA$10,300 Main Event is Billard’s first major title. It was a special occasion for Billard who was happy to have this career-defining victory in his very own hometown at the Playground Poker Club in Quebec, Canada.

Billard entered the final day as the most aggressive player – a strategy that greatly helped him win his largest career cash to date. Billard’s latest win brings his live tournament earnings to nearly $3 million