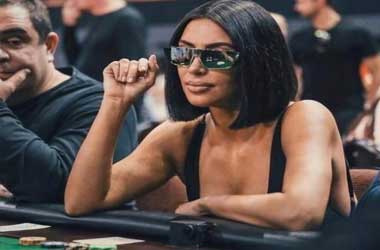 The news that Kim Kardashian wore mirrored sunglasses at the “If Only” charity poker tournament in Texas, in July 2018, caused a huge commotion on the Internet.

Social media and the Internet in general love everything related to the Kardashian family.

This is especially true if it shows any of the members of the family in situations that could be interpreted as “stupid” or “moronic” as people online often describe them.

But are things always actually that black and white? Of course not. Regardless of whether you like or dislike the Kardashians and their show, you should rely on facts before you judge any of their actions.

That is something the Internet has failed to do this time, as it had many other times before as well.

Many even questioned whether the news was true, and there’s no doubt that it is. But the implications are not that grim at all.

Fake news is a major problem nowadays as the Internet allows information to travel at unstoppable speeds, regardless of whether it is true or not.

Take, for example, this story of Justin Bieber “being photographed” eating a burrito sideways. The story went viral in a matter of hours even though it was fabricated as a prank by the guys behind the YouTube channel “Yes Theory”.

However, in this case, the news that Kim Kardashian was wearing mirrored sunglasses at a poker tournament was not fake. It is completely real, but the complete truth is slightly different than the one portrayed on social media platforms.

Here is the actual image of Kim Kardashian wearing mirrored sunglasses at the “If Only” charity poker tournament.

Here is one of the most common ways the photo was described on Twitter:

Any time you feel like an idiot and nobody takes you seriously, remember that Kim Kardashian once played poker with mirrored sunglasses. pic.twitter.com/r8QTFoJnT8

This is just one of the examples, as many other memes went to the lines of “If you ever feel like a moron, remember that Kim Kardashian wore mirrored sunglasses at a poker tournament”

But as I’ve mentioned, the Internet was quick to jump to conclusions that day.

Here are some reasons why Kim Kardashian’s decision to wear mirrored sunglasses at a poker tournament was not stupid but a smart strategic move, of course if you choose to play online, there’s no need to worry about what you wearing!!.

# Lots of Poker Pros Do It 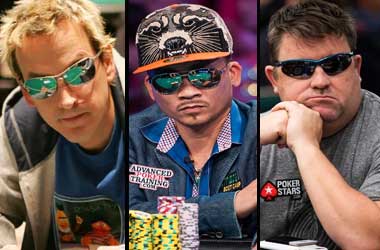 First of all, the fact that Kim Kardashian wore mirrored sunglasses at a poker tournament puts her in pretty good company since the best poker professionals in the world do it too.

It is not at all uncommon to see poker masters wearing mirrored sunglasses, even though it sounds like a counterintuitive thing to do.

Some of the names that I’ve managed to dig out include Phil Laak, Scott Fischman, Connor Drinan, Iwan Jones, Qui Nguyen, Chris Moneymaker and many other players. If they did it, it means the idea is not that dumb and there is probably a pretty good reason behind it.

# The Cards Cannot Be Seen in the Reflection

The main reason why the occurrence of Kim Kardashian wearing mirrored sunglasses at a poker tournament caused so much outrage is that common sense tells you that your opponents can see your cards in the reflection. But that’s not true.

First of all, poker players almost never pick up their cards to see what they have been dealt. Instead, they bend the corners of the cards just enough to peek at the cards and see what they have. That’s the same way Kim looked at her cards, meaning that she either has some experience when it comes to playing poker or she simply did her homework.

In addition, even if you held your cards in your hands, the chances of your opponents seeing what you have would be very slim. The cards would have to line up perfectly with the sunglasses and your line of sight and the opponents’ eyes would have to be at a perfect angle for them to see the unobscured reflection. That’s highly unlikely to happen.

Why do poker players wear sunglasses when playing poker in the first place? Because, as you know, the eyes are the windows to the soul. In a poker game, that makes them your worst enemy and your opponents’ biggest ally, which is why you want to take them out of the equation.

If you decide to bluff in order to win, with a little bit of practice you’ll find it easy to control your body movements. However, it’s almost impossible to control your eyes. They are almost always going to give you away.

Mirrored sunglasses are usually 100% opaque, which is why they are the best option if you want to hide your eyes. Other choices only partially hide your eyes, so they would be a poor choice.

# The Reflection Confuses Your Opponents

Imagine talking to someone who is wearing mirrored sunglasses for a prolonged period and trying to look them in the eyes. You wouldn’t be able to. Instead, you would see your own reflection or whatever fills the space around you. That’s a pretty unnatural situation to be in, so your brain will start getting confused after some time.

This is one of the reasons why professional poker players wear mirrored sunglasses at big tournaments. Focus and concentration are the most important factors when it comes to being on top of your game while playing poker. Hence, players do everything they can to disrupt their opponents and cause them to lose their grip.

When Kim’s opponents would try to look her in the eyes, their brain would instead get a lot of useless information, such as the green poker table, the colourful chips, other players at the table, and so on. The brain then tries to analyse that information and loses precious time and energy that could otherwise be used to make good in-game decisions.

# She Did It Because of Publicity

If there is something the whole Kardashian family is good at, that’s taking care of their publicity. They know how to give people just the right amount of drama to remain relevant in an age when you can be forgotten in a day.

Public stunts are not uncommon, and many are familiar with Kim’s other “performances”. Some marketing experts claim that this is one of the main reasons Kim decided to wear mirrored sunglasses.

Her marketing team predicted the outrage that would occur on the Internet. You need to remember that any kind of exposure is good if it helps you make money. So the fact that the photo of Kim wearing mirrored sunglasses went viral makes this stunt a success.

Finally, chances are that whenever Kim Kardashian or any other member of the Kardashian family appear in public, they are endorsing certain brands. I’m not sure which brand made the sunglasses Kim wore, but I’m pretty positive she was sponsored by them. I can only imagine how happy they were with the advertisement and how much they enjoyed the spike in sales that inevitably ensued after that.