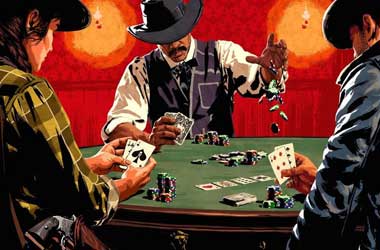 Red Dead Redemption 2 has been an instant hit ever since it came out in late October of 2018.

This action-adventure game that perfectly depicts 19th-century American West has amazed players with the way it uses its open-world mechanics.

You can do a lot of things in the game aside from the main missions. Free-roaming includes mini-games like Shootout, Stronghold, Gold Rush, Grab the Bag and more. There is even something for players who enjoy casual gambling, like Poker.

In this article, I will explain to all of you poker enthusiasts out there how you can play poker from the perspective of Arthur Morgan, one of the game’s protagonists. I will tell you about the locations wherein you can find the game and how to beat your opponents so you can unlock those precious achievements. Let’s go!

Note: If you looking for real poker action why not try our no deposit poker sites…

Where to Find Poker Games in RDR2?

Just like in the first game, poker in Red Dead Redemption 2 can be found in multiple locations. Essentially, there are five different locations on the map where you can play poker: Valentine, Tumbleweed, Saint-Denis, Flatneck Station and Blackwater. Additionally, you will sometimes be allowed to play poker with your gang members at various campsites.

Poker in Valentina and Saint-Denis is available at the local saloons. To play the game at Flatneck Station, you first must complete the mission Who Is Not Without Sin. Poker in Blackwater and Tumbleweed is only unlocked once you complete all the missions.

You can play poker only when the saloons and the stations are open. If the places are closed during your visit to the locations, you will have to wait until morning.

Poker is also obligatory during a mission called A Fine Night of Debauchery. During this mission, you will get help from your friend Leopold Strauss that will signal you what to do. However, you can also choose not to have his help and beat the game on your own, which will complete one of the mission’s Gold Medal Objectives.

Every poker game in RDR2 follows the rules of Texas Hold’em. If you don’t know the rules to this poker variant, here’s a quick explanation.

You will have four options in every betting round: fold, check, bet, or raise. The card rankings in Texas Hold’em go as follows:

If you wish to learn more about poker rules in Red Dead Redemption 2, you can go to the game’s main menu and select “Poker” under “Activities” in the help section.

Before each round, two players must bet a nominal amount called the small blind and the big blind. The size of the blinds vary depending on the table’s stakes, and they can range from 4¢ to 10¢ in Red Dead Redemption 2. The blinds stay fixed during the single-player mode, but they will double after five rounds in a multiplayer version. The buy-ins range from $2.50 to $5.

Poker in the game comes with no betting limits, which means that any player can go all-in at any time during the betting rounds. Also, you are allowed to quit at any time and cash in the chips that you have earned up until that moment.

In order for a player to have the incentive to play poker in RDR2, the game has set several poker challenges. If you complete these challenges, you will increase your stats and have a stronger character.

Note that poker challenges are only a part of all gambling challenges, and there are 10 of them in total. You can also play Five Finger Fillet, Dominoes and Blackjack, all of which have their own set of challenges.

Is Poker in RDR2 Realistic?

Considering it’s only a mini-game, poker in Red Dead Redemption 2 is incredibly realistic. And when I say realistic, I don’t mean the visuals and the characters’ emotions. The game itself is very sophisticated and even better than some actual single-player poker games that you can find online.

The opponents are not easy to beat, and some have distinctive playing styles that you will notice once you played long enough. Some characters play overly aggressive and go all-in often, while others tend to be more cautious and play it safe.

In any case, the experience of playing poker in Red Dead Redemption 2 is great, and if you’re a poker enthusiast, you will find it to be very realistic and entertaining.

Only the first hand that you play in a mission called Who Is Not Without Sin will be fixed. From then on, the hands are as random as they can be. The game uses RNG to ensure that all outcomes are random and fair. So, if you start losing, it won’t be the game’s fault, and you would simply need to become better at playing poker.

How Much Money Can I Make While Playing Poker in RDR2?

Honestly — not much. Poker in Red Dead Redemption 2 is meant for fun and for completing challenges. The stakes are just too low for you to actually win big prizes. Only if you play for a really long time your balance will start growing, but that would really be a shame considering how much this game has to offer.

I think this was deliberately done so that some good players won’t exploit this feature of the game and use it as a mean of making money and progressing easily through the rest of the story.

Although it’s less than one year old, Red Dead Redemption 2 is already considered one of the best open-world games ever to come out. Considering the fact that the developers put so much effort into making the poker mini-game so realistic and entertaining, you can only imagine how the rest of the game looks like.

If you like playing video games, I give you my full recommendation to try RDR2. As far as the poker mini-game goes, I hope that this guide gave you all the necessary information and that you can now start completing those challenges. Have fun!

Just wanted to say superb blog! I am a huge fan of Red Dead Redemption and was very excited to see a poker element added to the game for the sequel… what’s not better then playing two games you like at the same time