Should You Play Aggressive in Short-Handed No-Limit Poker?

Should You Play Aggressive in Short-Handed No-Limit Poker? 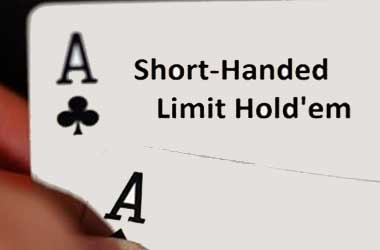 Short-handed poker is played with six or fewer players, making it obligatory to play more aggressively than you would in full-ring poker. Simply put, it forces you to play more hands in order to win.

Most players are aware that aggression is an essential ingredient of a winning strategy in short-handed poker. But oftentimes, they don’t know how to apply that principle when game time comes.

In this poker variant, you’re either a fish or a shark, and it’s the proper use of aggression that makes the difference.

Many of the great players excel in short-handed play. That’s because these games are less mechanical and rely more on strategic thinking. Also, good players can exploit the less-skilled ones more than in full-ring games because there are more hands and more decision-making.

Today, we’ll show you how to play aggressive, yet winning short-handed no-limit poker. We’ll talk about:

At the same time, why not try the following strategy yourself for real money or if one of dedicated UK Poker Sites.

With a wrong approach, playing more hands is a sure way to quick losses in short-handed poker. Going all-in every single hand just isn’t going to get the job done. That’s because even fairly-weak players can quickly develop counter-strategies against such playstyle. In fact, they are the easiest type of players to beat in No-limit, regardless of how many people are at the table.

The winning approach is selective aggression, similarly to full tables, just with a much more extensive range of selection. Your strategy should allow you to make one-try stabs in medium-size pots. By that we mean that you need to give up on the pot you’re trying to win on the flop when called.

This is essential in short-handed poker, and if you can’t do it, then your bankroll will undoubtedly swell, and the shark who smooth-called you on the flop will collect the prize.

In these games, you should implement the “raise or fold” philosophy, especially before the flop. If no one has entered the pot yet, then you should raise with any two cards 8 or higher most of the time. If someone beats you to the pot, then don’t follow with anything except the super-premium hands. You don’t stand a chance in any pot where you’re not the aggressor, bare a few rare exceptions.

If I decide to see the flop, I insist on both power and position. In this case, power means that I tend to be the last pre-flop raiser, while position means that I’m the one calling the shots. On the flop, you should raise around 75% of the pot, regardless of your cards. And if you encounter any resistance, including a call on the flop, you should simply give it up, unless you have monster cards.

If you play this way, you will:

When you’re in the blinds and someone raises the pot, you shouldn’t worry about being dominated, and focus on defending the hands that you would have folded if you were playing a full-ring poker game.

For instance, in a ten-handed game, having A-8 off-suit in the big blind when a player raises would result in an instant fold by all except the worst players. In a short-handed variant, however, this is a robust hand, worth of a frequent re-raise, and one which you rarely fold.

In early position, you should mix it up a bit by varying raising and limping with several hands. You should establish boundaries, though, and not play hands like K-9 suited, A-2 off-suit, or worse. If you get something like a KQ off-suit, suited A-x, QJ off-suit, A-9 off-suit or higher, or any big suited connectors, you should raise.

In late position, it’s all about raising and re-raising. Even hands such as QJ can be a raising hand because of the potential extra value you can gain from taking the lead and establishing position. That said, you can raise with any big suited connector or an A-x suited pair.

On the flop, you must keep playing aggressively, especially if it’s a heads-up pot and you were the aggressor. Short-handed poker is mostly about winning the pots with bluffs and semi-bluffs.

Most players would go all-in with any flash or a straight draw as if it was the strongest hand possible in poker, and it’s correct to do so in many cases. It takes a lot of skill and experience to know when and how to take advantage of an unimproved AK for value on the river, and this is something you should try to learn.

As you can see, you shouldn’t be recklessly aggressive every single hand and call all flop bets. Try our approach instead, play it like that for a while, and you’ll start to realize the difference quickly. The worst possible scenario is to find yourself on the flop when you’re not the aggressor because you won’t be able to call that flop. Knowing exactly what’s coming won’t matter, because you can’t stop it no matter what you do. That’s why you should play aggressive, yet thoughtful, and we’ve shown you the most effective way to do it.

If some of your questions remained unanswered after reading this article, please don’t hesitate to drop a comment below.