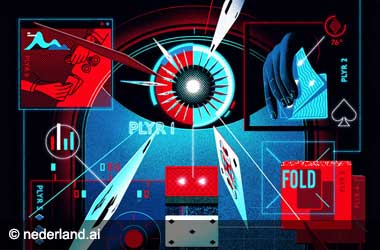 From Computer to the Casino: How AI May Revolutionize Poker As We Know It

This article will cover the relationship and impact that artificial intelligence and poker have had on each other in the recent past and how we think poker is going to change in the future due to machine learning.

Artificial intelligence (AI) systems learned to beat humans at Go and Chess long before they learned to beat poker pros. Creating a system capable of defeating a human player was difficult because poker is a game requiring intuition, reasoning, and strategy. Poker players must use hidden information to make their next moves. Despite these challenges, people developed AI systems capable of winning at poker.

A team from the University of Alberta in Edmonton, Canada used algorithms and deep machine learning to create an AI system capable of beating humans at a game of two-player NL Texas Hold’em. A poker variant full of opportunities to bluff, random outcomes, and hidden cards, NL Texas Hold’em is the toughest for any AI system to master.

The University of Alberta team created Polaris in 2007, incorporating several fixed strategies and poker bots in the system. They gave the computer program the freedom to choose these strategies while playing a poker match.

Polaris matched its wits against professional poker players Ali Eslami and Phil Lak in July 2007 in the Hyatt Regency Hotel in Vancouver in British Columbia. Lak was not new to Polaris. In 2005, he had defeated VexBot, an ancestor of Polaris, although he had later admitted that he was lucky to do so.

In the 2007 challenge, the human players got two wins, one loss, and one draw while playing with Polaris.

The 2008 version of Polaris turned out to be tougher to defeat. In a six-session match played at the Second Man-Machine Poker Championship in Las Vegas, Polaris won thrice, lost twice, and had one draw.

Polaris is an exciting example of how researchers worked on an AI system over several years to improve and make it a stronger opponent for human players.

An AI system developed in 2017 by Tuomas Sandholm and Noam Brown of Carnegie Mellon University, Libratus was invincible. It needed 100 central processing units (CPUs) to function.

The system participated in a 20-day poker match and played 120,000 hands against four Texas Hold’em players. It beat the humans and won poker chips worth $1.8 million.

The robot Pluribus created history by beating some of the best poker pros in a six-player Texas Hold’em game. Created by a team at Carnegie Mellon University, the AI system was the first to play against more than one poker player in a match that required more than the use of strategies to win.

Pluribus played 10,000 hands against five poker players. Each of its opponents had won millions in poker cash games and tournaments. Pluribus won an average of $480 from its human opponents for every 100 hands, which is what most poker pros aim to win.

Pluribus had worked a lot before playing against professional poker players. The system practiced hard, playing trillions of hands against itself. It then played with one poker pro, who alerted the developer team whenever it made a mistake.

The bot was quick to improve whenever it received new information. It started as a mediocre poker player but soon became the best in the world. It created a distinct style of its own and used different strategies based on game situations to defeat its five opponents.

Claudico Learns On Its Own

A team of graduates from Carnegie Mellon University, led by Prof. Tuomas Sandholm, took up the challenging task of helping a robot learn independently, instead of being programmed with existing strategies, moves, and alternatives. The project was challenging because it required a supercomputer with a RAM of 16 terabytes.

Regarding the project, Sandholm said that poker is a benchmark for AI research, just as chess was in the past. Voicing his opinion of poker, Sandholm said it is a complex game requiring machines to make decisions based on misleading and incomplete information because of decoys like ‘slow-play’ and ‘bluffing’.

Claudico was ready to perform in July 2014. The machine won a match against other computers, but played against professional poker players only in 2015.

The system played several heads-up matches with Jason Les, Dong Kim, Doug Polk, and Bjorn Li from April 24 to May 8. It played two poker matches, comprising over 750 hands for eight hours per day, making it up to 20,000 hands per player. The intention was to create a large sample of a poker hands and remove the luck factor from the game. The machine played 80,000 hands, making it the most number of hands played in a ‘human vs. AI’ system match.

Microsoft and Rivers Casino had donated a prize pool of $100,000, and the poker gaming action was streamed live on Twitch.tv. The highlights of the AI vs. human match also appeared on Poker Night in America, a show on the CBS Sports Network.

The humans won the match by scoring 732,713 chips. Later, Polk said that the AI programming team had to work on improving the AI system based on its performance. Talking to PokerNews, he said that when human players may place bets worth three-quarters or half of the pot, Claudico would bet 10% or even 1000% of the total pot value. He said a human player wouldn’t bet $19,000 to win a pot worth $700.

MIT hosts poker bot tournaments. The annual poker bot event at MIT has teams of up to four programmers playing against one another to figure out which bot has the best poker skills. Competitors also apply mathematics, computer science and economics-concepts usually not developed in academic settings to defeat opponents.

According to MIT’s tournament site, poker is a principle application of game theories and decision-making skills required for trading because it is a game of uncertainty and incomplete information. Just as traders make decisions based on limited market information, poker players make moves based on hidden information.

The competition attracts several sponsors and gets fierce (intense), although it is not the same as the World Series of Poker (WSOP). Each team of programmers has to program an autonomous poker bot in one month.

The poker bot tournament held in 2022 had prizes worth over $40,000. In addition to capturing the attention of the poker gaming community, the event attracted representatives of technology firms and quantitative trading companies.

Do Bots and AI Systems Have an Advantage over Human Players?

There is also no way for a machine to reveal any physical information. On the contrary, human players reveal information about their poker hands through facial expressions and gestures.

Poker players who have played with AI systems say that machines do not reveal any signs or signals that they are bluffing. However, physical signs may make or break the game for a human player participating in a live poker tournament.

Playing poker online is also more exciting than playing with AI systems because you are playing with human opponents. AI systems have proved their superiority to poker pros, but they are least bothered about winning or losing a game.

A bot defeating random players makes no difference in the real world. But winning a game played with a human opponent makes a lot of difference. The experience of visiting the cashier to withdraw your winnings has no parallel.

If we could sum it up in one sentence, we would say the thrill of defeating human opponents is much more exciting, as well as rewarding, than overcoming AI systems or bots.