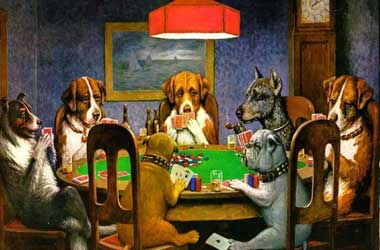 Regardless of whether you are an art lover or an avid poker player, you must have come across the famous painting known as by Cassius Marcellus Coolidge.

The painting has been featured in the media numerous times, appearing in The Simpsons, the Police Academy movie, The Thomas Crown Affair, etc. — and even in Snoop Dogg’s music video What’s My Name.

While it might not be Da Vinci’s Mona Lisa, there’s obviously something so fascinating about it that has kept captivating people ever since 1903.

Today we’re going to dive into its long history to try to uncover what’s behind its charm!

Who Is Cassius Marcellus Coolidge? 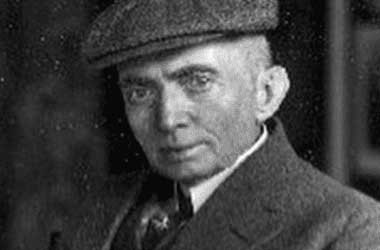 Coolidge was an American painter who became known for his Dogs Playing Poker paintings. He was born in 1844. The artist had no formal training but had so much talent that he started selling illustrations in his early 20s.

Humour was a big part of his life, so all his drawings were always made to create a comic effect, including the one we’re discussing in this article.

Also, you must have taken a photo in one of the photo stand-ins at a carnival at least once. In case you are not sure what we’re talking about here, these are basically paintings with openings where people can place their heads to become life-size caricatures. An interesting fact about Coolidge is that he is actually considered the creator of these popular photo stand-ins.

What You May Not Know About “Dogs Playing Poker”

The painting everybody recognizes as Dogs Playing Poker is actually called “A Friend in Need” (shown above) and is a part of a series of 16 paintings. Coolidge painted this series for an advertising agency called Brown & Bigelow, as a part of their campaign for cigars.

This famous painting, together with the others (Poker Sympathy, Pinched with Four Aces, Stranger in Camp, A Bold Bluff, One to Tie Two to Win, Poker Game, etc.) from the same collection, was reproduced on posters, calendars, and prints and dispersed across America.

Interestingly enough, although the whole series is called Dogs Playing Poker, only 9 of the paintings actually stay true to that name, depicting various poker games played by dogs.

# Series Not Welcomed by the Critics

Because the paintings were commissioned for a commercial purpose, critics quickly labeled them as kitsch. The entire series was joked about in the artistic circles and discarded as no more than a sight-gag. What’s more, a whole press release was issued by William Hennessey, the director of the Chrysler Museum of Art in Virginia, in 2002, stating he was trying to get the series of paintings for the museum as a prank.

Still, there are those who disagree with this criticism. Patrick J. Kiger and Martin J. Smith, the authors of Poplorica: A Popular History of the Fads, Mavericks, Inventions and Lore that Shaped Modern America, pointed out that Dogs Playing Poker should be looked at as a commentary on the upper-class’ overindulgence and lavishness.

# Paintings Quite Pricey Regardless

Even though it has not been accepted as a masterpiece, Coolidge’s Dogs Playing Poker series has become a part of pop culture, and, as such, it has been appraised as pretty valuable. While the most that Coolidge got for one of his works was $74,000, much has changed since then.

# The One We All Misname

A Friend in Need is the painting that is the most popular out of the entire series. It is also the one that is the most commonly referred to by the name of the whole collection. You’d probably recognize it — it depicts seven dogs sitting around the table, playing poker. What makes the painting so special — and gives it its name, at the same time — are the two dogs closest to the viewer, caught in the act of cheating.

The painter invites us to sympathize with the cheating bulldogs, who are having each other’s back while confronted with a bunch of hounds. A little bit of deception for the sake of friendship goes a long way to stroke one’s fancy, apparently.

# The One That Was Sold for Most 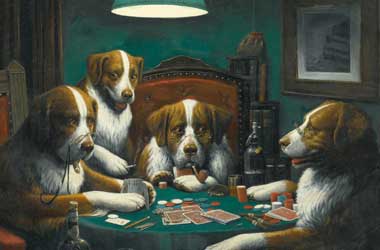 As we have mentioned, the painting called “Poker Game” cost a pretty penny.

But why is that? Why is it that one is thought to be more valuable than the rest?

Once again, as the name suggests, the painting shows four dogs playing poker. However, if you look closely, you’ll catch an interesting detail.

You can see that the dog on the left is holding a recognizable poker hand. This is what poker players call Four of a Kind — four aces and a queen. If you’re a poker player yourself, you’ll know this is one lucky hand to come by. Therefore, the painting becomes a depiction of anticipation — the feeling of pure excitement you get knowing you have just what it takes to crush your opponents.

The next piece that the author painted after this one also confirms that he was striving to evoke these feelings. Namely, as a playful continuation and an emphasis of the action happening in Poker Game, Coolidge’s next painting is called Looks Like Four of a Kind.