Continuation Bet — How and When to Use It

Continuation Bet — How and When to Use It March 19, 2020 Adrian Sterne https://top10pokersites.net

Continuation Bet — How and When to Use It 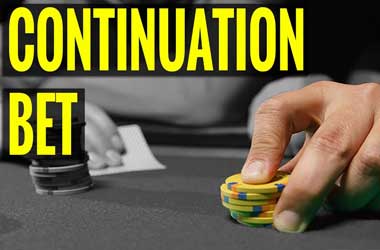 Even if you haven’t heard of the continuation bet, chances are that you’ve made one yourself without knowing it.

A continuation bet, also known as a c-bet, is a move used mostly in Texas Hold’em. It refers to a bet made by a player on the flop who has previously made a raise pre-flop. That player has continued to seize the initiative, hence the term.

Continuation bets are highly popular among poker players due to the fact that one’s hand doesn’t improve on the flop. Therefore, the first player to raise may take down the pot right then and there.

If you play legal poker frequently, you’re probably going to see a continuation bet during your session, regardless of the skill level at the table. If you are not aware of it and don’t know it should be used, you are putting yourself at a significant disadvantage.

Know when and how to best use continuation bets to your benefit with the help of these simple tips.

In this article, we’re going to talk about things like:

Should You Use C-Bet?

Your starting hand shouldn’t influence your decision to make a continuation bet. Statistically speaking, the majority of the time, the opponent won’t do well on the flop either. With this in mind, c-bets can pay off more often than not.

In addition to providing you with a fantastic opportunity to see how your hand plays out, c-betting can help you create fear equity and establish control of the orbit. In fact, continuation betting is epic in its simplicity and effectiveness. It doesn’t matter if you have a good hand on the flop or not — you’ve already taken your chances by calling the blinds, and come flop, you’re not folding.

Having this kind of confidence in your hands allows you to gain control, and having control with a busted hand is better than having none with a strong hand.

Using c-betting leads to one of the three possible outcomes:

How often you get raised depends on the type of opponent you’re up against. If you’re playing a casual poker game against your low-skilled buds, they will most likely raise your c-bets only with their absolute best hands. Consequently, more skilled opponents may throw in some semi-bluffs as well. So make sure you know your opponent and adjust your strategy accordingly.

Now you know what c-bets are and what kinds of benefits they bring to a real money table. But just because you can use them doesn’t mean you should always do it. If you want your plan to come to fruition, there are few factors to consider when going through with continuation bets.

While a continuation bet is not the bravest of poker moves, it does involve a certain degree of risk. Therefore, if you want to capitalise on it, it’s best that you do it when you’re in a late position. It would be ideal if you were the last player to act. Trying to pull off a continuation bet early in the game would mean that you’re going in without having any clue how any of your opponents are going to play.

# Adapt to Your Opponents’ Playstyle

You’ve heard the saying: “You are what your friends are.” Well, in a way, that can translate to poker as well. The way you play affects the people at your table. This means you have to change your approach frequently, granted you’re not playing with the same group of people all the time.

As a rule of thumb, it’s best to focus your c-bets on tight players as they are less likely to take risks. Keep in mind that continuation bets are most effective when playing against one or two opponents. Any more than that and the likelihood of someone getting something good on the flop increases dangerously.

Although we may have made it sound like the cards themselves shouldn’t influence your decision of pursuing c-betting, let us make clear that they matter and they matter big time, just perhaps not in the way you’d think.

With c-betting, your hole cards don’t matter. The cards that you should pay attention to are the ones in your opponents’ hands, as well as the cards on the board.

Here’s what we mean by that:

Continuation bets are must-learn moves in today’s Texas Hold’em poker game. If you want to be a successful poker player,  it’s in your best interest to learn the benefits of c-bets and when is the appropriate time to incorporate them into your play.

There is no guarantee that these moves will pay off 100% of the time, but these tips mentioned above can help you improve the effectiveness of your strategy. The good thing about c-bets is that they are relatively cost-effective, so you won’t be losing much even if things go south.