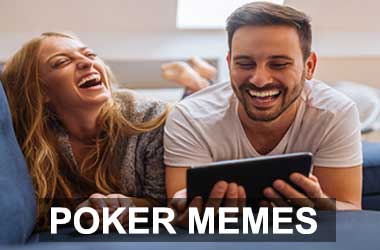 Unless you’ve been living under a rock for the past ten years, you’ve probably heard of memes. These pictures are most usually meant to evoke laughter.

Still, they often depict funny yet bitter truths. Being able to say “yup, that’s true” when looking at niche memes gives us a great sense of connection with other people.

What I’m trying to say is that memes bond us. They keep communities tight, and one of the closest communities on the web nowadays consists of novice and professional poker players. This has resulted in some of the greatest poker memes.

Therefore, selecting the five best ones was rather difficult, but I’ll share the five I considered the funniest. Moreover, I’ll explain each meme, as newcomers to the world of poker will also read this article. 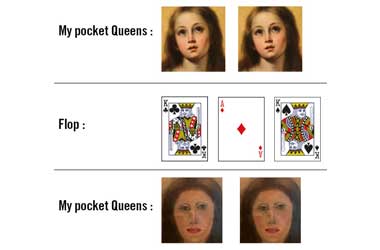 A pair of queens in the pocket is always a lovely sight. However, the game of poker is full of unexpected twists, and the queen, however strong, is still not as strong as kings or aces. When the flop shows kings or aces, you need to assume that somebody already has a better hand than you, so your chances of winning the hand are significantly lowered, hence this meme.

The image of the queens comes from the painting Immaculate Conception by Murillo, which was allegedly cleansed by a furniture restorer instead of an art restorer.

# Master Oogway Your Way Back 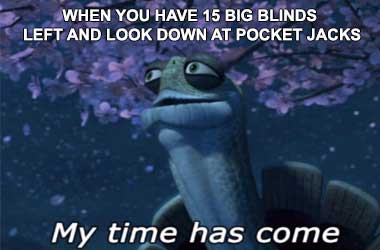 If you enjoy playing poker tournaments, you’ve probably been in this situation before. Having just 15 big blinds isn’t much, meaning you’re likely to hit the rail soon. However, it’s also enough to help you get back to the game, and all you need is a great pocket hand to start with. Master Oogway, the popular elderly teacher from Kung Fu Panda, has this iconic line in the movie.

The irony is that Oogway is old, and uttering “My time has come” isn’t something you’ll often hear old people say. That’s actually how poker players with 15 BBs left often feel when they get a glimmer of hope in the form of great hole cards. 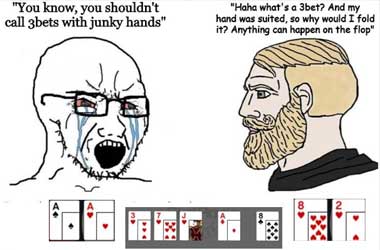 The regular player on the left is all about the rules and strategies, which is what many regulars tend to stick to. The fun player on the right is a newbie and willing to risk three-betting on an 8-2 suited against the bullets. This is not something most experienced players would do.

Still, we have to remember that poker is a game of chance, and taking a risk now and then can be lucrative.

As you can see from the picture, the fun player won thanks to the three cards on the flop of the same suite as his hole cards, which caused frustration for the regular player. He doesn’t even know what a three-bet is. Ignorance is bliss, I suppose. 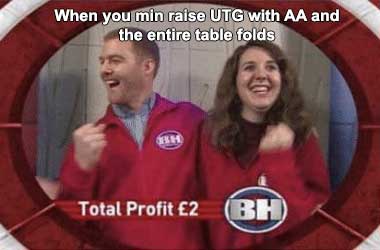 UTG stands for Under the Gun, which is the first position left after the big blind. Poker players usually don’t like it because they are the first to make a betting decision. Due to the pressure of having to make the first move, the feeling is as if someone put a gun to your forehead.

Having the pocket rockets is tricky. If you bet too much money UTG, all will fold.

But there’s nothing worse than hiding your great cards and everyone else folding nevertheless. The irony of winning this type of hand is depicted in the meme above. 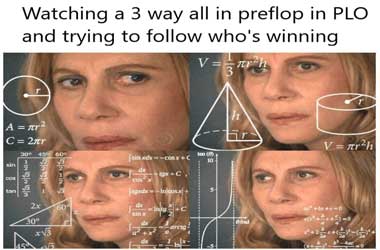 Texas Hold’em players often know every single detail about this type of poker. However, the second most popular poker type is Omaha (or Pot-Limit Omaha, its most common form).

Hold’em players often struggle to understand it due to somewhat different rules, especially in terms of betting, hence the meme above.

Look, some of the memes here might not be funny to you, but I find them hilarious because I’ve been in similar scenarios many times. Anyways, I also wanted to share a couple of great ones I’ve been saving for the last couple of years. Let’s take a look at them. 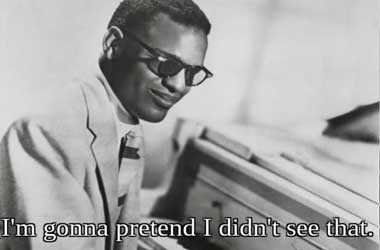 when you 3-Bet Light and Get Cold 4-Bet 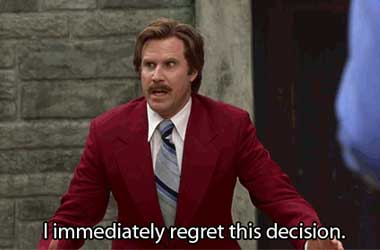 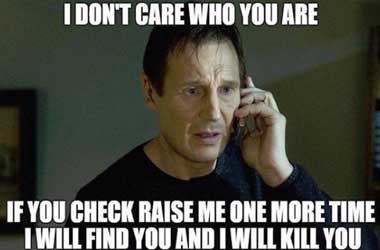 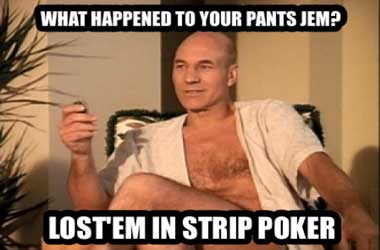 I hope I made you laugh at least a bit. Now, it’s up to you to create a Poker Memes folder and save anything great you come across.

Getting back to that folder now and then can be therapeutic, especially after a bad beat or a losing session — it will remind you that poker is just a game and that you’re supposed to have fun playing it.