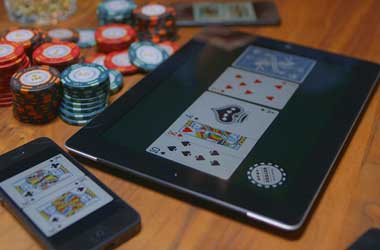 Nothing quite like playing poker in real life – physically being there and laying your cards down on the table, raking in the chips and seeing through your opponents’ game faces.

But for those of us who are constantly on the move, mobile poker games can conveniently deliver most of the aspects we love so much about poker, including the thrill of taking home the winning pot.

If you’re one of those people, then you’d be pleased to know that we’ve picked out the most reliable real money poker apps on both Android and iOS platforms for you to be able to play poker anywhere, provided you have a reliable internet connection.

888Poker is the second biggest online poker website in the world and has a poker app available for both Android and iOS platforms. A powerful contender for the best real money poker app out there, 888poker strives to be user-friendly, with its intuitive interface and decently-sized buttons, decreasing the chances of slipping up due to pressing the wrong button. 888poker boasts a plethora of quality-of-life features including quick-seating, player chat, a smooth bet slider, Webcam poker tournaments, and a web cashier. The app is well-optimized, thus the game itself runs without a hitch on a reasonably steady connection.

partypoker has grown in leaps and bounds in the last 24 months and has become a favourite poker room with players from around the world. Their mobile poker app is currently available for Android only.

The partypoker app hosts over 2000 players and over 1000 active tables at all times, so you’ll never run out of people to play with.

Unibet poker has a cool mobile app which is available for Android devices and iOS tablets only. Unibet Poker features an attractive interface, with the option to change your player avatar and name to maintain anonymity. Players can take part in Texas Hold’em and Omaha cash games, with sit-and-go and high-speed games too.

The biggest online poker website in the world has an innovative poker app that is compatible with both Android and iOS devices. PokerStars offers a variety of game modes, including sit-and-go’s, ZOOM, and all of the other offerings they also have on their desktop client. PokerStars also boasts features like player chat, player search, quick-seating, a web cashier, and seamless switching from the desktop client to the mobile app, even while in the middle of a game. Players can play four tables at once on the Android app, but the iOS app bumps this up to five concurrent tables.