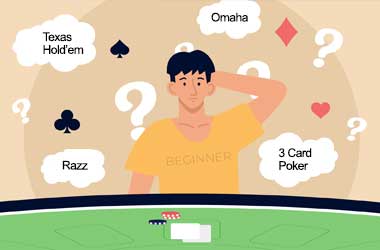 Poker has always been one of the most popular and played casino games out there. It’s intellectually challenging, requires skills and practice, gets one’s adrenaline pumping, and, most importantly, incredibly fun.

Due to these and many other aspects, poker’s popularity has recently reached new heights.

You’ll find versions of this game featured in tournaments around the globe and many land-based and online casinos. If you’ve never tried playing poker but are not sure where to start, we’ve prepared a list of poker variants suitable for beginners. Read this article and learn more about each.

Poker is not a simple game to master, so it’s important you know the basic rules before playing this game.

We’ve focused on the most important points in this section, so you have all the necessary information at your fingertips and start gambling.

As promised, this section will cover the most popular poker variants among beginners. Go through our list below, read about different poker versions, and pick whatever seems the most interesting to you.

This is the most popular of all poker variants. You can find this variant in numerous casinos, either brick-and-mortar or online. Thanks to this game’s widespread online presence, it is incredibly accessible to beginners.

Now let’s discuss the rules. Texas Hold’em involves a 52-card deck, and it sits from two to ten players. When the game starts, the two players sitting in the two opening positions — on the dealer’s left — place bets known as the blinds. Then, the croupier deals two hole cards to each of them. The betting round starts as the same two players decide whether to call, raise or fold. After them, the betting continues clockwise.

In the last round, the remaining players reveal their cards, and the player with the best 5-card combination wins the game. 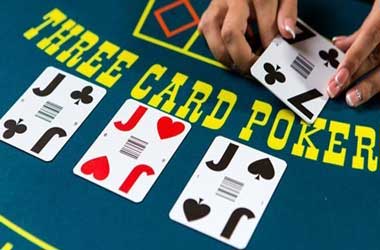 This poker version is known as very straightforward and fast-paced. It also requires no knowledge of any advanced strategies, which is why we recommend it to poker rookies.

3 card poker is unique because the player faces the dealer. The player starts the game by placing an ante and/or a pair plus wager. You only place a pair plus bet if you believe you’ll have at least a pair in their hand once you receive your cards. Then, both the dealer and the player get dealt three cards and have two options — to fold or to place a play bet. The play bet is worth the same amount as their ante.

If you fold, the dealer takes the ante, and if you place the play wager, both of you have to reveal your cards. The person with the better hand wins. 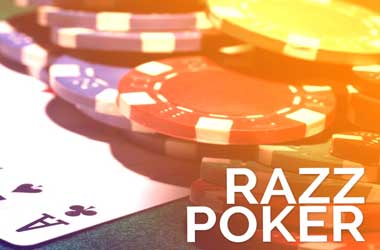 Razz might be the right choice for you if you’re on the hunt for a unique yet not too complex poker variant. The players aim to get what traditional poker would consider the worst possible hand in this variant, so the dynamic is completely different.

The game begins when the dealer deals two hole cards and one up-card known as the door to each player at the table starting from the left. The player who has received the highest-value door card has to place the first bet. They can bet the amount their ante is worth or make a bet that’s worth at least the minimum bet amount allowed in this game. The betting round continues to the left.

After the round ends, the players receive another up-card, and the person with the lowest traditional poker hand starts the next round. They can begin by checking or betting. In the following two rounds, up-cards are dealt and in the next one round a hole card is dealt. Each player has a 7-card hand in the end. They can use those cards to create the lowest possible 5-card combination to win. 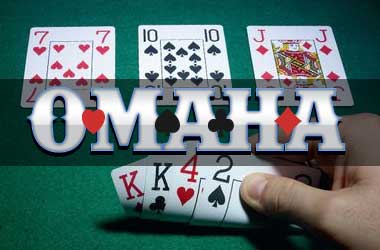 Omaha is the second most popular version of poker. It’s featured in many tournaments, and you can find it in plenty of online casinos. It’s a great option for players looking for some extra excitement and challenge.

This game has several versions, but we’ll discuss Pot-Limit Omaha here. You can do some research on the rest once you get a good grasp of this one.

Omaha shares a lot of its rules with Texas Hold’em, so you won’t find its gameplay overwhelming. The dealer places five community cards on the table — the flop, turn and river — just like in Texas Hold’em. However, the players receive four instead of two hole cards in Omaha. They need to choose which two out of those four hole cards they want to combine with the community cards to make their 5-card combination.